Race Relations In America Improving Every Year, And The Media Hates It

Race Relations In America Improving Every Year, And The Media Hates It 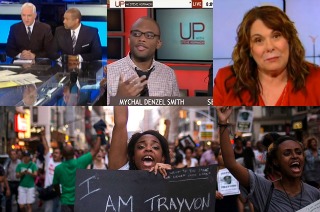 Many readers of this post clicked through only because they were appalled at the implication in that headline – that racism in America is on the decline. This empirical, undeniable reality provokes predictable expressions of disbelief, rage, and frustration from those who wish to believe it is not true. They are the predictable reactions one would expect to follow any expression of heresy which contradicts canonical “truths.”

Those who insist that race relations in America are on the decline are provided with ample, anecdotal evidence on a daily basis from the news media which supports this article of faith. But the overwhelming preponderance of evidence contradicts this assertion. Even merely asserting that there has been undeniable progress in relations between blacks and whites in the U.S. over the course of a single generation is greeted with horror from the establishment media. Much like the prosecutors in the trial of George Zimmerman argued that the jurors needed to decide the case with their hearts rather than their heads, the media asks its audience to emote and disregard the facts when discussing racial politics in America. This is a tragedy.

In a post last week, I noted that political commentators – on the left and right – predicting civil unrest in the event that Zimmerman was found not guilty were displaying an offensive lack of faith in or knowledge of the black community. That verdict came and, with some small-scale exceptions, that event was not characterized by a violent response from African-Americans. Unsurprisingly, though opinions about the correctness of the verdict varied, the vast majority of all Americans internalized the jury’s decision rationally.

This prediction was not a difficult one to make. Any historical reading of the progress of race relations in this country suggests that they are far better today than they were in 1992 – the last time a shocking trial verdict resulted in widespread rioting.

Gallup polling over the course of the last 50 years measures the trajectory of how blacks and whites view one another. Since Gallup started recording data on race relations in 1963, the trend has been an undeniably positive one.

In 2011, a full 76 percent of Americans believe that “new civil rights laws” are “not needed” to advance racial equality. Just 21 percent said that they were – down dramatically from August, 1993, when 38 percent agreed that new laws relating to civil rights are necessary.

Following the O.J. verdict, 68 percent of Americans said that race relations in America will “always be a problem.” Only 29 percent said they believed that racial animus will “eventually” disappear. In 2011, 52 percent believed that race relations between blacks and whites will “eventually [be] worked out.” 46 percent insist that problems will persist, up from 30 percent in 2008 following the election of the first black President of the United States.

In Gallup’s most recent survey of the state of race relations in America in January, 2013, a majority of Americans said that they were “somewhat” or “very” satisfied with racial progress in America. While all of the above data points have fluctuated – and racial progress comes in fits and starts, occasionally receding at times – the trajectory of race relations in America are following a historically positive trend.

It is not merely a fact of American life measured in survey responses. Gaps indicative of racial disparity in this country continue to dissipate. “According to the most recent census data, blacks have virtually closed the gap with whites not only in the percentage graduating from high school but also in the percentage graduating from junior college,” wrote Orlando Patterson in the New York Times… in 1997. Today, in an underreported but critical development showing how race relations have improved, the 2010 census showed that, while blacks were slightly less likely than other groups to receive a college degree, “Blacks were also more likely to have completed some college than any other group.”

Unfortunately halted by the onset of the Great Recession, the income and wage gap between blacks and whites was gradually, though not fast enough, approaching parity in 2005. Persistently higher unemployment among blacks in the wake of the financial downturn has exacerbated the perennial problem of a wealth disparity between the races. But the statistical trends are hard to ignore.

None of these statistics are cited as an effort to show race relations are perfect, or that racial disparity does not exist. Inequality and racism do exist in America – in varying degrees, they probably always will. But these statistics do empirically advance the notion that the equality of opportunity for blacks and whites, as well as non-white Hispanics and Asians, is progressing every year.

Many, particularly those in the elite media, react bitterly to this news. The outcome of the Zimmerman trial has highlighted how many media professionals cling to the belief that racial disparity in America is fixed feature of its existence and will never appreciably dissipate.

“This is, for many Americans, another piece of evidence of the incontrovertible contempt that this nation often shows and displays for black men,” argued radio and television host Tavis Smalley on ABC’s This Week on Sunday.

The Nation‘s Mychal Denzel Smith parodied left-wing overreaction by saying that Zimmerman’s defense “literally invoked the same justification for the killing of Trayvon Martin that you would during lynching.”

“George Zimmerman was protecting, not just himself, but white womanhood from this vicious, black thug,” Smith added breathlessly.

These are the same media voices likely to call for a “frank, national conversation on race” after making these comments which can only be characterized as conversation-stifling. It has never become clearer that the media rewards commentators who reject measured conversation and the fostering of a dialogue for irresponsible baiting and instigation.

At the very least, responsible news anchors and commentators should be arming their viewers with the facts prior to rending garments over the state of race relations in America. Even if these statistics do not support the narrative of persistent racial hatred which they have committed their careers to addressing.