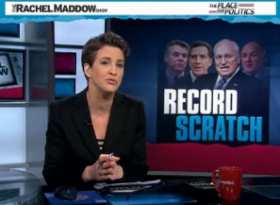 It’s been somewhat amusing this past week to hear media types express surprise over the fact that last week’s attempted bombing of Flight 253 resulted in an immediate round of partisan finger-pointing on Capitol Hill. I’m not sure what people were expecting after a year that must have set the record for bitter partisanship battling, but I shudder at this point to think what it would to take place to have both parties agree on…anything.

Yesterday, the always helpful former Vice President Dick Cheney got in the mix telling Politico that “as I’ve watched the events of the last few days it is clear once again that President Obama is trying to pretend we are not at war.” Which is a bit much for any number of reasons not the least of which (really not the least…more on that in a moment), is that President Obama just sent 30, 000 extra troops to Afghanistan last month. Cheney goes on:

Really? Well Rachel Maddow for one isn’t having it. After bemoaning the Dem’s lack of response to the flurry of criticism coming from the right she hits back at both Cheney and the party as a whole (video below) for both their inaccuracies and hypocrisies :

“Republicans left to their own devices have in this case excitedly launched a series of obviously baseless, factually incorrect, demonstrably untrue, hypocritical attacks. Dick Cheney comments today probably the worst among them.”

Maddow then proceeds to list a litany of names and events that happened under the Bush-Cheney watch, which also made us less safe according to Cheney’s description of yesterday. These would include: Richard Reid and Zacharias Moussaoui and Guantanamo. All of which appears to put Maddow in the awkward, Catch-22-ish position of defending Obama against Cheney using the argument that if Cheney and Bush did it it makes it all right? Or merely makes Cheney a hypocrite. The mind reels.

Perhaps the only conclusion to really draw from all this that when it comes to politics and national security during the Aughts aught has really changed. Maddow’s full response is below.