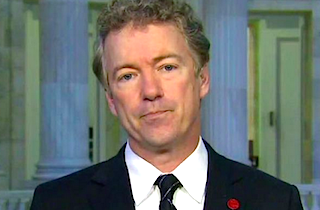 Sen. Rand Paul (R-KY) was the only major 2016 presidential candidate who stayed utterly silent on the Supreme Court decision that legalized same-sex marriage nationwide. Perhaps he just needed a bit more time to formulate his response, which came in the form of an op-ed for Time magazine on Sunday.

Like the rest of the Republican field, Paul “disagrees” with the ruling. But he has a unique solution: get rid of government-sanctioned marriage altogether. In other words, now that gay people can get married, maybe no one should be able to get married by the state.

“I acknowledge the right to contract in all economic and personal spheres, but that doesn’t mean there isn’t a danger that a government that involves itself in every nook and cranny of our lives won’t now enforce definitions that conflict with sincerely felt religious convictions of others,” Paul writes in a convoluted formulation that connects the issues of government intrusion and religious liberty.

“Perhaps the time has come to examine whether or not governmental recognition of marriage is a good idea, for either party,” the senator adds. For those, like Paul, who believe “government does little right,” removing it from the marriage contract seems like a no-brainer. Like Justice Clarence Thomas, Paul seems to agree that even if all citizens have a right to marriage, they do not also have a “right to governmental recognition and benefits.”

Paul sums up the issues at hand thusly:

So the questions now before us are: What are those rights? What does government convey along with marriage, and should it do so? Should the government care, or allocate any benefits based on marital status?

And can the government do its main job in the aftermath of this ruling — the protection of liberty, particularly religious liberty and free speech?

We shall see. I will fight to ensure it does both, along with taking part in a discussion on the role of government in our lives.

Perhaps it is time to be more careful what we ask government to do, and where we allow it to become part of our lives.

While he does not answer the first of those questions definitively, Paul appears to be implying that he is in favor of removing government benefits for married people of all sexual orientations, essentially erasing the marriage incentives that were put in place to encourage the stable, family structure that most conservatives hold up as absolute.

Now that all gay Americans have access to the same incentives as everyone else, Paul thinks it’s time we taken them all off the table.