Reactions to Rush: The Good, the Bad, and the Ugly

Reactions to Rush: The Good, the Bad, and the Ugly 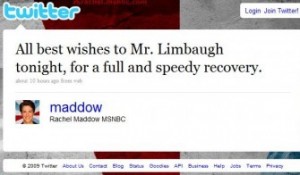 of Twitter has spawned new rituals, among them the watchdogging of reactions to the deaths or illnesses of polarizing figures. Rush Limbaugh‘s chest-pains scare from last night was no exception. Almost immediately, conservatives began to catalog the good, the bad, and the ugly in online reaction to Rush’s peril, and some others were eager to hang the ugliness on the collective left.

We’ve got a sampling of each for you, including some very good behavior by the left’s most visible media figure.

Rachel Maddow, arguably the current media face of the left, displayed the humane perspective that one would expect from any decent person when someone’s survival is in doubt, saying “All best wishes to Mr. Limbaugh tonight, for a full and speedy recovery,” while Mediaite’s own Rachel (Sklar) urged restraint, saying “No stooping to wishing him ill, people! (Karma.)”

Hot Air’s Ed Morrissey also places things in perspective on his blog, noting that callous reactions such as these are “a common problem on both sides of the political divide, and we all know it.” He goes on to tell a story that illustrates Limbaugh’s human side that might not make you feel the warm fuzzies, but might at least quell the giddy anticipation of his sudden death felt by some of his detractors.

There were also immediate attempts to conflate the comments of trolls at TMZ with the larger online left, and similarly to assign the death wishes of tweeple emboldened by anonymity to “liberals.” Ugly, to be sure, but hardly empirical.

On the other hand, there were very identifiable liberals who couldn’t muster a good thought, or even silence, for Rush. Blogger Oliver Willis lit into Rush with relish, pointing out the radio host’s track record, cracking jokes about his drug use, and vowing to gloat if Rush died. Progressive blog Buzzflash joked about Limbaugh’s illness, and compared him to Stalin and Goebbels.

White House reporter David Corn tried to strike a balance, urging restraint while pointing out the lack of the same that Limbaugh displayed as Ted Kennedy fought for his life.

Everyone has to draw their own line where these things are concerned. I believe that, when someone has died, or their fate is in doubt, it is best to either wish well or remain silent. The Oxy jokes will keep for a day or two. But we should all be able to agree that celebrating, or wishing for, the death of another human being should be reserved for the very worst of villains if it is to be done at all. In this world, Rush Limbaugh doesn’t meet that bar.