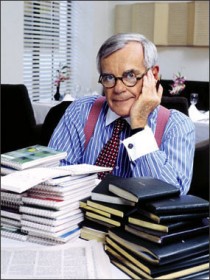 It was no easy feat becoming Dominick Dunne. Think about it. He was the most celebrated chronicler of downtrodden socialites. He feasted on their famine with little sympathy or admiration for their formerly exalted positions. Yet somehow they invited him back. Not only was he invited back to the most exclusive and social-est of socialite events, but his attendance celebrated. If Dominick Dunne’s cackle could be heard in the room, it was, by definition an A-list event.

So how did he do it? How in the often surreptitious world of vapid excess did he break their tacit rules of secrecy and still return to a hero’s welcome every night? How did the man once blackballed from the Hollywood insider scene he so adored manage to avoid reliving that fate as he dissected the innards of the latest society scandal? Some might say, as he aged, his unimposing appearance helped. Small, rotund and bespectacled, walking with what might be described as a waddle, Dominick never looked or felt remotely intimidating. But that explanation hardly does him justice. He was not a jovial “little man.” Dominick Dunne had a dark side and dark past. In the end, he utilized the same tools that made him a great reporter to transform himself into an equally welcome, acclaimed, and ever so eloquent social traitor.

He listened, he followed up, he cared. Truly. He knew what people wanted to hear and said it, often along with a guffaw. Dominick working a party often felt like an animated film — bright colors, loud noises, and action packed adventure. But more important he extracted confidence by regaling groups with self-deprecating stories of his own life as well as amusing but relatively innocuous gossip about others. His disarming manner combined with the media muscle of his Vanity Fair column led most to forgive what might be seen in some cases as social perfidy. Maybe forgive is too strong, because he also had something so many of them coveted, the key to a world of fame and, when necessary, the key out.

On the one hand, the uber-social, and often equally wealthy were generally appreciative of, if not downright eager to be mentioned by the equally social (but not quite as wealthy) Dominick Dunne, but they almost never wanted to be the subject of his latest piece. After all, that likely meant that he or she was accused of something dark, scandalous and almost certainly criminal.

I met Dominick when I was a cub reporter for Court TV on the OJ Simpson case. He was, at that time, just beginning to enjoy his notoriety as a celebrity journalist covering and critiquing the celebrity world. During the nine months of that trial all the reporters developed the sort of friendships you generally only develop in college living together day in and day out. Day after day we took our assigned seats in the courtroom and then met in the hall during breaks as we stalked the attorneys. As a 28-year-old reporter for a small cable channel, I turned to him as a mentor. I was hungry and eager to break stories. He admired that tenacity and devotion. But he wasn’t looking to be the purveyor of sage advice. He wanted information from me too.

What started as a symbiotic professional relationship became a cherished friendship. He introduced me to his fantasy world. It felt like he knew everyone in Hollywood. Anytime we went out to dinner to discuss the latest in the case, we would spend a third of the evening greeting well wishers, often faces anyone would recognize. “Oh and you must know Dan Abrams of Court TV,” he would say, which, of course, they didn’t. But it wasn’t just social. He was working too. Many would provide him with a nugget of information or gossip at which point he would scramble to scribble it down in one of his leather notebooks. They trusted him and so did I. His work was his life because his life was also his work. The things he seemed to love most were socializing with the elite and then writing about them.

He was forty years my senior and I would say that even then he was less like a father figure and more like my great, cool, interesting friend. I introduced him to girlfriends, went out for nights on the town and shared some of my most jealously protected secrets. While I did not see him as much in the last few years I always knew he was there when I needed him and vice versa.

I will miss my pal Dominick Dunne. I am sure his funeral will be just the sort of event he would have loved. Based on who will be there, I am sure he wishes he could have been there to cover it.