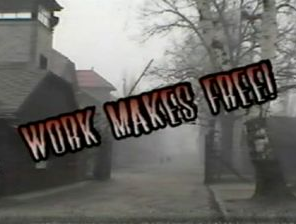 Did you know GOP presidential hopeful Michele Bachmann made a movie? It’s true! Back in 2002, when she was making a name for herself as an education activist with the Maple River Education Coalition, Bachmann collaborated with a man named Michael Chapman to make a film called (rather delightfully) Guinea Pig Kids II. At the time, Chapman, described in this document as a “historian and education researcher,” had warned that state and federal education reforms were putting the United States on the path toward its very own Holocaust, turning impressionable school children into “global citizens.” Together, Bachmann and Chapman traveled throughout Minnesota with their warning, their efforts eventually culminating in Guinea Pig Kids II (not to be confused with this Guinea Pig Kids), which, besides informing mostly church-going Minnesotans that their children were at risk of becoming cogs in the government’s terrible machine, hoped to raise funds for the MREC.

Mother Jones explains the specific motivation behind the movie:

As Bachmann and Chapman explained, a little-known federal program called Goals 2000, initiated under the Clinton administration but consistent with a similar plan supported by President George H.W. Bush, was paving the way for a national curriculum. The new curriculum, the two speakers maintained, moved the state away from established truths like the supposedly Christian founding documents, and replaced them with secular documents, such as the Universal Declaration of Human Rights, that allowed the state to craft its own set of values. Guinea Pig Kids was designed to explain “Minnesota’s new centrally-planned education, workforce & economic system and how citizens are trying to reverse it.” Over the course of the film’s two hours, Bachmann and Chapman did just that.

At one point in the film, Chapman asks viewers the following: “Have we evolved beyond the capability of repeating the atrocities of the past?” before launching into a narrative about Nazi concentration camps. This part begins around 2:30 in the Mother Jones clip below, after a rather charming intro for the movie (Bachmann has, truly, come a long way since 2002):

Bachmann echos Chapman’s concerns: “As I was listening to Mike,” she shares, “I wondered — perhaps you had this same thought — I was wondering: Is this something that’s coming? Or is this something that’s already here?” Watch her response, below, during which she also espouses the idea that the Lord had a direct hand in founding our nation:

So, basically, Michele Bachmann is the anti-Hitler.

This was not, however, the sole controversial and discussion-worthy position Bachmann has taken when it comes to childhood education. Ryan Lizza‘s profile of Bachmann for The New Yorker (This is an article I strongly recommend, by the way, especially if you are relatively unfamiliar with the role Christian fundamentalism and the concept of Dominionism play in Bachmann’s political views. Or if you, like me, have grown obsessed with reading all things Bachmann.), details how, in 1993, Bachmann, completely dissatisfied with the education her foster children were receiving, took the initiative to start a charter school, called New Heights, designed especially for at-risk youth. Upon the school’s opening, she and the six other founding members signed a document maintaining that the school — which was obviously publicly-funded — “is and will be non-sectarian in all programs, admission policies, employment practices and all other operations.” But, as time went on, that school began to drift from that original promise:

Soon after the school year started, parents began to notice that New Heights had a strong Christian orientation. At an October meeting, a board member asked whether a document called “20 Key Principles of Christian Management” was officially part of the school’s “documentation,” as Meyer [That would be Dennis L. Meyer, an evangelical activist and former teacher who acted as the school’s CEO] had claimed in a memo to the board. Denise Stephens, a parent of a student at the school, told G. R. Anderson, Jr., a reporter for the Minneapolis City Pages, that creationism was being advocated and that students were not allowed to watch the movie “Aladdin,” because it involved magic and paganism. The school district warned New Heights that it risked losing its charter. “I told Mr. Meyer and Ms. Bachmann some of my concerns and indicated that I was not going to be able to support something that seemed to be headed in a direction contrary to the state law,” David Wettergren, Stillwater’s superintendent of schools at the time, told me. About six months after the school was founded, Bachmann and Meyer resigned from the leadership. With the two of them gone, the school purged the curriculum of its religious orientation. “The school pulled itself together, so we continued to charter it,” Wettergren said.

So, while Bachmann’s concerns about education are not entirely invalid, incorrect or misguided — she was worried, for instance, that the “Profile for Learning” program should shift the focus if public school from education to workforce preparation, and her concern over her high school-age foster kids bringing home coloring assignments for math class led to the creation of her charter school, which remains open — they are motivated by the idea that, again, individual states and the nation in general are “moving away from established truths like the supposedly Christian founding documents.”

So, really, the comparison to concentration camps and the concern that mathematics is under attack are all simply a heaping serving of frothy whipped topping over the real issue here: That Bachmann — as a politician — believes that the United States should look to Christian documents and God’s will when it comes to everything from our children’s education to laws concerning civil liberties.