Rep. Joe Barton Apologizes For ‘Misconstruction’ Of His Apology To BP 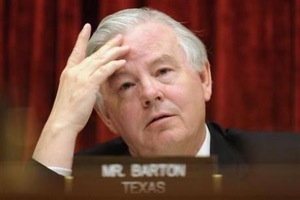 It took a few hours, but Congressman Joe Barton has finally come out and retracted his apology to BP for having had to put up $20 billion in an escrow account for claims. After stating that his comments, in which he said he was “ashamed” of the White House for “shaking down” BP were ‘misconstrued,’ he announced that “I want to apologize for that misconstruction.”

Given the passion with which he initially commiserated with BP CEO Tony Hayward this morning on being forced to establish a “slush fund,” and the clarity of the language he used, it’s hard to imagine where exactly the “misconstruction” lay, though it appears from further statements that he believed the misconstruction involved the belief that he did not think BP should be held responsible. He wanted to make it clear that this was not so much a defense of BP– which he condemns for their actions– but an attack on the Obama administration. Barton retracted the entire apology in a public statement:

“I apologize for using the term ‘shakedown’ with regard to yesterday’s actions at the White House in my opening statement this morning, and I retract my apology to BP. As I told my colleagues yesterday and said again this morning, BP should bear the full financial responsibility for the accident on their lease in the Gulf of Mexico. BP should fully compensate those families and businesses that have been hurt by this accident. BP and the federal government need to stop the leak, clean up the damage, and take whatever steps necessary to prevent a similar accident in the future.”