Rep. Maxine Waters: President Should Tax ‘Gangsta Banks Out Of Business’ If They Don’t Help Homeowners 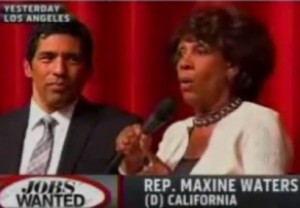 In a clip that’s sure to make the conservative media rounds, courtesy of BreitbartTV, Rep. Maxine Waters tossed out the kind of catnip that drives conservative pussies wild when she told a Los Angeles town hall crowd that President Obama should bring in the banks that we bailed out, and insist that they help struggling homeowners. If not, she thinks the President should tell them, “we’re gonna tax them out of business.”

Waters told the crowd that now is the time for the President to use the bully pulpit, and “bring the gangstas in, put them around the table and let them know that if they don’t come up with loan modifications and keep people in their homes, that they’ve worked so hard for, we’re gonna tax them out of business.”

While conservatives will only hear the “tax” and “out of business” parts, and use them to reinforce the stereotype that Democrats are “anti-business,” Waters’ (completely unrealistic) advice actually reflects the truth: Democrats are against businesses that hurt people. Yes, Virginia, there are actually some businesses, and business practices, that it’s okay to oppose. These banks took our economy into the toilet, then they took our tax money to bail them out, and then they made billions off of the catastrophe they created. While this may be the wrong kind of payback, it’s tough to argue with the impulse.

Of course, it was the Obama administration, and before it, the Bush administration, who structured the bailout in such a way that it only benefited the banks, and not the consumers they screwed, and it was the Obama administration that set up a useless loan modification program that only helped the homeowners who least needed it, all while controlling both Houses of Congress and the White House. Now that the President has zero leverage, talking about doing anything to the banks if they don’t help consumers is an exercise in futility. For Waters, who has made headlines of late, it will at least whip up the base.

Here’s the clip, via MSNBC: