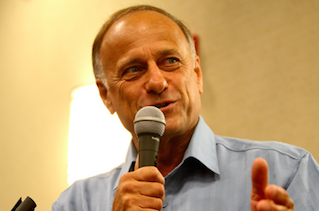 Most elected officials have been extremely hesitant to condemn the people of Ferguson, Missouri, who have been protesting for nearly two weeks over the fatal shooting of unarmed teenager Michael Brown by police officer Darren Wilson. But during an interview with Iowa radio host Jan Mickelson on Wednesday, Rep. Steve King (R-IA) made his disgust with the protesters’ “irrational” behavior known.

During the nearly 90-minute long interview, Mickelson invoked the words of Dr. Ben Carson, saying, “you’ve got to have courage just to say what you see, and you can’t worry about being called a racist if you’re just saying what you see.”

King agreed, which led him to share his thoughts on what makes a “reasonable” and “rational” society, and in turn, his thoughts about Ferguson. “So if this society is going to reject reason, and move towards an irrational society — by the way, it’s irrational what’s happening down in Ferguson, Missouri,” he said. “It’s irrational. Even if their allegation is true, the cop is innocent until proven guilty.”

“But what’s happening is the community, the people that are doing the looting down in Ferguson, Missouri have concluded that he is guilty or else they concluded that it’s a good excuse to do what they’re doing,” King said later. “And so even if the officer is guilty of what the governor implies he may be guilty of, then there’s no reason to punish the community.”

“But they’re burning the community, they’re looting the businesses in the community and they’re rioting, they’re punishing their own community for something that they think, or at least allege, that a police officer did inside their community,” he added. “That is irrational and it should not happen in this country and it doesn’t happen with rational people.”

Listen to audio below, via WHO Radio: