Report: Cop in Van Believed Freddie Gray Was Faking It

Report: Cop in Van Believed Freddie Gray Was Faking It 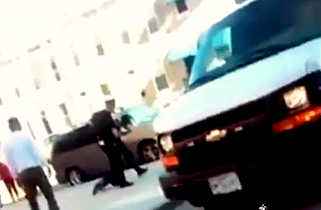 The Baltimore Sun’s crime reporter Justin George was granted exclusive access to the Baltimore Police Department’s task force charged with investigating the death of Freddie Gray from a spinal injury while in police custody.

The whole thing is worth reading, but first catching attention is the detail of Gray asking for medical help, cries that apparently went ignored by officers who thought he was faking it:

Task force members continued to investigate all possibilities even though they felt confident that Gray had suffered a “catastrophic injury” while being taken from the arrest at Gilmor Homes to the Western District police station. They discovered that the van’s video camera was broken and that one of the officers during the transport said Gray had “jailitis” — a faked illness — when he complained about his condition.

And they spent many hours retracing the actions of Officer Caesar R. Goodson, Jr., the wagon driver. Goodson, the investigators said, had heard Gray ask for medical help a number of times — a key factor in the charges Mosby would bring against him.

George paints a picture of a task force trying to complete what would normally be a months-long investigation in the space of two weeks while anticipating the likely pushback if they missed anything. George added that alleged threats from gangs against police officers curtailed some of their investigatory efforts.

The task force handed its findings over to the state attorney’s office Friday. Members said they were “surprised” by her decision to charge the six officers involved with homicide.

Read the whole piece at The Baltimore Sun.