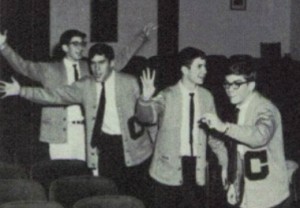 One of the more interesting, yet woefully under-reported, facts to emerge this week about presumptive Republican presidential nominee Mitt Romney is that, while attending Cranbrook boarding school/involuntary barber college, he was a cheerleader for the school’s pep squad. Also noteworthy, yet underreported, is the fact that the golden-tressed classmate Romney is accused of forcibly hair-butchering went on to share a passion with Romney’s golden-tressed future wife: dressage horses.

The Washington Post‘s expose´ on Mitt Romney’s high school years at Cranbrook has been beaten to death like a bowl of rented egg whites this week, yet for some reason, the media have focused on the bullying in the story, and Romney’s ice-clown reaction to it. While many people agree that the former is of limited relevance, given the passage of time, the latter became an irresistible narrative-deepener, confirming the suspicions of his detractors that Romney possesses the human warmth of a hypothermic Real Doll™, while providing conservative supporters (well, settlers) with an opportunity to indulge in a media victimization orgy that would make Caligula blush.

But at its heart, that Washington Post profile was a biographical background piece, and aside from Mittward Scissorhands, a puffy one, at that. You don’t hear conservatives bleating about all of these “smears” from that “hit peice”:

…and many more. And those are from a single paragraph!

It’s also surprising, given the last Republican president to wield the pep megaphone, that no one seems to have batted an eye at the revelation that Mitt Romney was a cheerleader at Cranbrook:

He wrote the most letters to the girls at the sister school across the lake and successfully petitioned to get placed in the top classes. He was not a natural athlete but found his place among the jocks by managing the hockey team and leading megaphone cheers for the football team.

…The time after class was set aside for sports. Romney wore the Cranbrook “C” on his white tank top as a cross-country runner, but the greatest impression he made in that pursuit was collapsing near the finish line during a meet — although his perseverance won him admiration and applause. He was more at home on the sideline, cheering the football team on as a member of the Pep Club, chanting such cheers into a megaphone as “Iron them out. Iron them out. Smooooth.”

That coincidence is more than just a fun little snark-nugget. It serves to marry (but not in a gay way!) Romney’s alleged conduct at Cranbrook with his later political life. At school, he wasn’t a jock, but he sought out the jock milieu by cheerleading, scorekeeping, and lettering in cross country, and when the situation called for it, he borrowed that unearned swagger to enhance his status.

In much the same way, famously former-moderate Mitt Romney has borrowed all the anti-immigrant, anti-gay rights, anti-letting-the-auto-industry-drop-dead, anyone (but me) would have gone into Pakistan to get bin Laden swagger that he hasn’t earned. He sees and hears what people tougher than him have done and said, and yells them into a megaphone.

While it probably doesn’t say much about Mitt Romney, there’s also this spooky coincidence:

He (John Lauber)  came out as gay to his family and close friends and led a vagabond life, taking dressage lessons in England and touring with the Royal Lipizzaner Stallion riders.

If nothing else, the Fox News Mole did teach us that the Romneys are equestrian aficionados, and that Ann Romney is specifically partial to dressage horses. It’s ironic that Romney felt such offense toward long, golden-tressed, dressage-inclined John Lauber, yet wound up in the perfect marriage to long, golden-tressed, dressage-inclined Ann Romney.

The piece also reveals that Romney’s equestrian leanings manifested themselves while he was at Cranbrook:

While there were seeds of Romney’s future devoutness at Cranbrook, he was then more interested in goofing off. In the evenings, he cut loose with Friedemann, a scholarship kid from the small town of Romeo, dubbed the Kraut. The two boys stayed up late, joking around and racing mops like racehorses up and down the hallway.

If Romney is now inclined to learn something from that, perhaps it’s that he ought to focus on the things that we have in common as human beings, and not the things that make us different. Nobody wants to force a Mitt Romney to marry a John Lauber, we just want the John Laubers of the world to have the same chance at happiness that the Romneys enjoy.