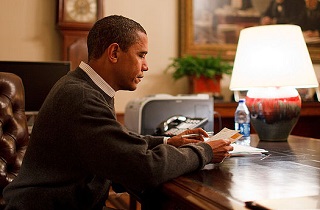 On Wednesday, authorities confirmed that threatening letters sent to New York City Mayor Michael Bloomberg and his gun control group tested positive for the poison ricin. On Thursday, law enforcement sources told several news outlets that another ricin letter had been intercepted, but this one was addressed to President Obama.

The letter is being tested for ricin. It was received Thursday at an off-site facility, and did not reach the White House, sources said.

The text of that mailing was identical to the letters sent to the mayor and his gun group, which threatened: “what’s in this letter is nothing compared to what I’ve got planned for you,” police and law enforcement sources said.

The postal workers’ union, citing information it got in a Postal Service briefing, said the letters bore a Shreveport, La., postmark.

Louisiana State Police spokeswoman Julie Lewis said state authorities have deferred to the FBI and have not opened an investigation. The Shreveport postal center handles mail from Louisiana, Texas and Arkansas, so the letter might have come from any of those states, Lewis said.

The mayor didn’t respond to questions about the letters Thursday morning as he arrived for and left a speech to the Real Estate Board of New York.

The billionaire mayor has emerged as one of the country’s most potent gun-control advocates, able to press his case with both his public position and his private money.

The people who initially came into contact with the letters showed no symptoms of exposure to the poison, but three officers who later examined the New York letter experienced minor symptoms that have since abated, police said.

Last month, ricin-laced letters were sent to President Obama and Senator Roger Wicker (R-MS) earlier this year, but the initial suspect was released after another man was taken into federal custody for apparently attempting to frame the first man.