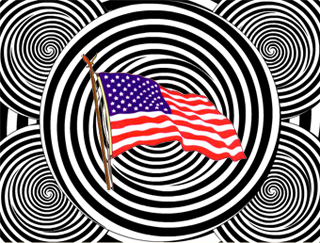 Well, I guess those few years when Republicans were covering themselves with more lapel pins that a Fridays waitress has finally worked out in their favor. A new study has come out that purports to show that, after getting a glimpse of the old glory, voters subconsciously move towards the Grand Old Party. What’s even stranger is that the psychologist behind the study believes the effects last for eight months.

The study, conducted at Cornell University, involved two separate experiments in which the participants were given tasks and half were given incidental exposure to flag images.

From the Cornell Chronicle:

“Shortly before the 2008 presidential election, the researchers recruited voters via social media to participate in an online political survey in exchange for a gift card. Half the screens shown to participants sported an unobtrusive image of the American flag. The researchers contacted participants immediately after the election and asked them how they voted. Those who had been briefly exposed to the flag, compared with those who had not been primed with the flag, were significantly more likely to have voted for McCain versus Obama.

‘A single, incidental exposure to the flag a couple weeks before the election changed how people voted,’ Ferguson said. Yet 90 percent of those surveyed said they believed seeing the flag would not influence their voting.

Eight months later, participants were asked about President Obama. Those who had been exposed to the American flag on the initial survey felt less positive about Obama’s job performance. “We did predict that this would happen, but we were a little surprised that it lasted eight months,” said Ferguson, who studies how incidental cues in the environment influence beliefs, goals or behavior in unconscious ways.

In a second experiment in spring 2010, the researchers showed study participants pictures of buildings with and without flags. Again, seeing the American flag shifted Democratic and Republican voters toward the right — although participants did not believe it was happening to them, even after they were debriefed.”

Clearly Betsy Ross was some kind of witch.

Just kidding. But this does seem to prove that the flag has magical brainwashing capabilities. I mean, we always thought that, but we just thought it was able to make people constipated.