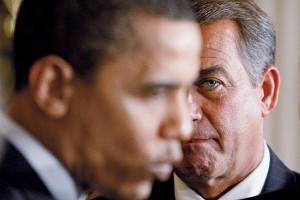 The sequester, Washington’s latest doomsday deadline, has claimed its first victim: House Speaker and hypothetical drone target John Boehner, who was brutally slain in a poor misreading of a stupid analogy by National Journal Editorial Director Ron Fournier. In a series of tweets, Fournier tried to contrast President Obama’s inability to forge a sequester deal with his decisive solution to the Osama bin Laden problem, which Gawker’s Max Read interpreted to mean that Fournier was suggesting the President should send a SEAL team to “murder John Boehner.”

To be fair, Gawker is a site with a humorous slant, and Read’s take was tongue-in-cheek, but unintentional humor site Newsbusters chimed in with straight-faced outrage:

It appears as though the days of civility and integrity in journalism are long gone. On March 1, National Journal’s Ron Fournier, formerly the Washington bureau chief at the Associated Press, took to Twitter to express his dissatisfaction with government sequestration, suggesting that President Obama:

Can handle Bin laden, not Boehner? He may be POTUS, but Obama incapable of “a Jedi mind meld.”

Newsbusters went on to note, hilariously, that “It remains to be seen if the National Journal will take appropriate disciplinary action.”

The intent of Fournier’s analogy was obviously to infer that if President Obama could solve the bin Laden problem, then Boehner ought to be a piece of cake, unless what he really meant was that the President should have tried to find common ground with bin Laden, rather than having him shot in the face.

No analogy is perfect, though, and the bin Laden premise isn’t even Fournier’s worst. A few days later, he was doing Twitter battle with former Obama speechwriter Jon Favreau, among others, over a fable that presented the sequester as muddy footprints:

Actually, my wife found it — clumps of dirt on the steps, tracked inside by her husband and son. I wanted to whine and dissemble and divert. I wanted to blame my kid – or at least debate who was most at fault. I wanted to fold my arms and stomp my feet until somebody else cleaned up the mess.
That’s when it dawned on me:

@ron_fournier: “Wife says son and I tracked mud in house. I blamed son, saying he did it first and most. Look at me! I’m presidential. #sequestration.”

As you might guess, that tweet inspired a spirited conversation about the difficulty of taking responsibility, both in life and in government. Participants included Jon Favreau, the Obama speechwriter who recently departed the White House. Like all analogies, this one has its limits. (For starters, I could have written just as appropriately, “Look at me! I’m the House Speaker!”)

But the case of the muddy steps sheds light on how disconnected from reality the debate in Washington has become. It helps explain why President Obama, as head of the national “household,” will ultimately be judged harshly by voters if the economy suffers — even if he is less at fault on the merits.

Fournier goes on to detail how he comically extended the analogy, no matter how soundly and quickly others dispatched it with pesky logic, when he really just should have repeated his central thesis, that somebody has to be the adult. Of course, that would have only led some wag to point out that Fournier himself criticized the President for doing just that: (emphasis mine)

His strategy is to bury Republicans beneath an onslaught of public pressure — punish them — rather than attempt the hard work of finding common ground.

That’s what “the adult” does when the stupid kid won’t listen, isn’t it? Finding common ground, I mean. Sure, I want you to eat dinner, but ice cream is technically a food, so…

The sequester, the fiscal cliff, and the debt ceiling are the three fathers of many stupid analogies, and the “household” one is among my favorites. Liberals usually react to this by rightly mocking the premise itself, but even on it’s own terms, what household tries to get out of debt without trying to get a raise at work, or logging some overtime, or getting the kids to fill up the tank now and then? You know, the things we in the “household” game call additional revenues? “No, honey, I worked last Saturday, the revenue conversation is over. Time to cut your dialysis.”

The one analogy that everyone seems to agree on, though, is that  threatening a government default is like a gun to the head of the U.S. economy, and that the sequester was supposed to be a gun to Congress’ head, but has turned out to be more of a gun to the kneecaps of the American people. Despite the efforts of balance-loving journalists like Fournier and Bob Woodward, President Obama is right. He can’t do a Jedi mindmeld, and he can’t make John Boehner clean up the muddy footprints, and he can’t just do a drone strike on John Boehner. I don’t think Predator Drones are even equipped with infra-orange.

He could have nipped this in the bud two years ago by daring Republicans to shoot the hostage, but at this point, President Obama is doing what he can do: punishing bad children who richly deserve it.