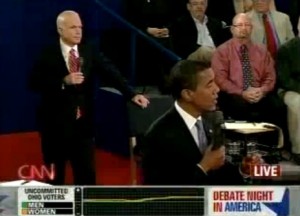 The justice that was served to Osama bin Laden Sunday is cause for solemn celebration, but in this instant information age, little time is wasted in assessing the political fallout of an event like the killing of the terrorist figurehead. While Republican leaders like former President George W. Bush and Sen. John McCain have graciously commended President Obama for his part in the operation, others, like former Governor Sarah Palin, have pointedly snubbed him.

The conservative spin in the Twittersphere has been that Obama “stayed the course” in the hunt for bin Laden, but the reality is that this mission is the fulfillment of a promise that then-Senator Obama made in 2007, one for which he was roundly criticized by fellow Democrats like now-VP Joe Biden and eventual Secretary of Defense Hillary Clinton, and then-GOP nominee for president John McCain. It’s also worth noting that conservatives noted a marked difference in the way President Obama conducted the War on Terror, criticizing him publicly for killing too many terrorists, while privately, silently urging him on.

On August 1, 2007, then-Senator Barack Obama made this prescient promise in a speech in Washington, DC:

His Democratic rivals tore into him, mostly for saying, out loud, what they all agreed needed to be done. His future Vice President said, at the time, “The way to deal with it is not to announce it, but to do it… The last thing you want to do is telegraph to the folks in Pakistan that we are about to violate their sovereignty.”

That criticism was echoed, to varying degrees, by Hillary Clinton and John McCain, who each took the additional step of misleading people into thinking that Obama favored an invasion or a bombing campaign against Pakistan itself. Obama responded to that inference during one of his debates with McCain:

In hindsight, it appears that Obama’s promise certainly didn’t hurt, and given that this raid was made without the Pakistani government’s knowledge, but developed with their cooperation, it is reasonable to argue that it helped.

President Obama, meanwhile, was very clear, in his speech Sunday night, that even though he was responsible for ordering the raid, those who planned and carried out the assault were the true heroes, lauding them for their “courage and capability.”

As far as President Bush goes, there are few who would argue that his detour into Iraq helped speed along the capture of bin Laden, and his administration gets a large share of the blame for bin Laden’s escape to Pakistan, but there will probably be many who will dig up this clip as evidence that Bush didn’t really care to catch bin Laden:

For what it’s worth, that’s not really a fair interpretation of what he was saying. Just as the right constantly does to Obama, this meme ignores the fact that President Bush was speaking to a wider audience, and was trying to diminish bin Laden’s propaganda value, successfully or not.

There’s nothing wrong with assessing the political (and consequently, the policy) consequences of this event, but it’s a fine line. The liberals who are taunting conservatives about this may feel justified by the relentless attacks on President Obama’s (mostly excellent) national security record, but it really amounts to an end zone dance on hallowed ground. By the same token, conservatives who want to pettily ignore, or rewrite, the work that President Obama has done toward hunting bin Laden down are using that same ground as a political latrine.