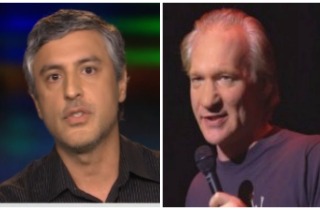 In a new interview with Salon, well-known religion writer Reza Aslan, who has appeared on Maher’s show multiple times, says Maher’s views have gone from fair criticism to “frank bigotry.”

“I suppose I would say that what’s different,” Aslan said, “is that Bill Maher’s usual critique of religion in general has morphed into a real crusade against one religion in particular — Islam — which he has on repeated occasions said is worse than the other religions [and] not like other religions; other religions are bad, but Islam is far, far worse.”

And I would say that the other thing that’s a little bit different is that the criticism of Islam has really crossed the line into what can only be described as frank bigotry. When he starts decrying how many babies born in Europe are named Mohammad, says things about Muslims in America “bringing that desert stuff into our world” — that is no longer just simple criticism of religious doctrine or practice. That’s a very specifically targeted animosity towards a particular group of people. You don’t see him saying things like that about other religious groups — though, again, in his defense, to him the problem is religion in general.

During their heated joust last week, Affleck said it was racist for Maher and others to blanket Islam as an entirely extreme and violent religion. “No it’s not,” Maher replied. “It’s fact.”