Richard Clarke - Bin Laden Not A Priority For Bush, Clinton

Richard Clarke: Capturing Bin Laden ‘Not One Of Their Priorities’ For Clinton, Bush 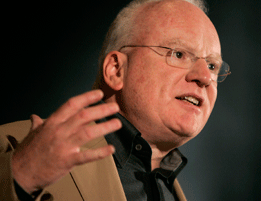 In an interview with Der Spiegel, former White House counterterrorism chief Richard Clarke says one reason why it took so long to track down Osama bin Laden is that capturing bin Laden was “not one of their priorities.”

Clarke outlines four phases of the hunt for bin Laden, dating back to 1996. In the earliest days, he argues, the CIA had the authority to go after–and later to kill–bin Laden, but “they didn’t really try very hard.” After 9/11, the desire to capture bin Laden intensified, but Clarke says the Bush Administration simply didn’t put bin Laden at the top of its objectives:

For the US military to just fly in and find one man was difficult — not impossible, but difficult. The US military didn’t want to do it because they thought it would fail and their people would get killed. When the invasion occurred in October 2001, the US military leadership planned an invasion of a country rather than the capture of a single man. They went about the invasion of the country very well, but capturing bin Laden wasn’t one of their big priorities. It is hard to imagine in retrospect, but President Bush didn’t let his White House staff, including myself and others, sit down with the military before the invasion and say, “Let’s see your plan, and let’s see how, specifically, you’re going to get Osama.” So they let him slip through their fingers when they really could have captured him then.

Clarke also describes a “furious” Bill Clinton, who approved an air strike on an al Qaeda training camp in 1998 despite concerns from senior staff that the president would be accused of using the attack to divert attention from the unfolding Monica Lewinsky affair. “He got furious with us and said, That’s none of your business. You just get me the national security advisor. Do you think we should do this? We’re going to do this, and it doesn’t matter what’s going on in my political life.”