Atheist Richard Dawkins: ‘Who the Hell Do These Muslims Think They Are?’

Atheist Richard Dawkins: ‘Who the Hell Do These Muslims Think They Are?’ 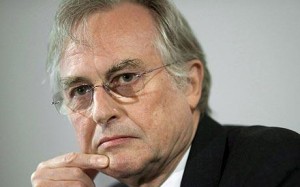 This weekend, noted atheist and best-selling author, Richard Dawkins, took to Twitter to express outrage over reports of attempted gender segregation at a University College London debate on Saturday.

As The Guardian reported this evening, a female attendee relayed what transpired:

“After having been told the event would NOT be gender segregated, we arrived and were told that women were to sit in the back of the auditorium, while men and couples could file into the front. After watching three people be kicked out of the auditorium for not following this seating plan, Dr Krauss bravely defended his beliefs of gender equality and informed event staff that he would not participate unless they removed the segregated seating. Needless to say, the staff got their shit together pretty quickly and the event (thankfully) continued.”

The event’s organizer, Zayd Tutton, disagreed with that account, while nonetheless noting there were separate “sections,” telling the Huffington Post UK:

“There were three sections as agreed with UCL prior to the debate. This was agreed clearly with UCL representatives. Muslim women choosing to adhere to orthodox Islamic principles in sitting in their own area had their own section. As for those who wanted to sit together, male or female, they had their own section where they freely mixed and sat together from the beginning.”

Dawkins’s tweets raised awareness about the incident and did not mince words: 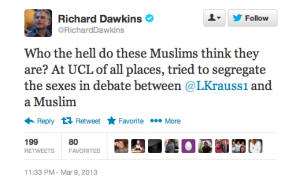 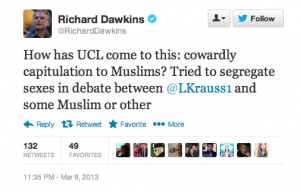 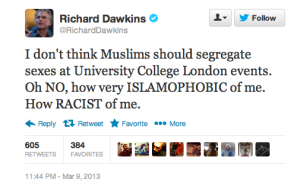 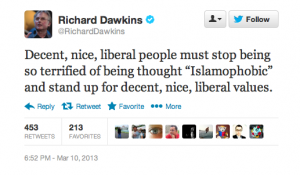 The world-renowned atheist has spoken out against Islam in recent years, referring to it as “one of the great evils in the world” and as an “unmitigated evil.”