President Rand Paul? Senator’s 2010 Maddow Interview Would Be His Undoing

President Rand Paul? Senator’s 2010 Maddow Interview Would Be His Undoing 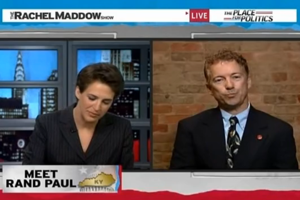 In the spirit of the upcoming NCAA tournament, if asked to name a Republican #1 seed for the GOP Presidential nomination in 2016, Rand Paul—who says he’s now seriously considering making a run–would be a strong favorite.

His rise to the top of the bracket comes after that instant-classic filibuster on the President’s drone strike policy. On cue, the event exploded on social media and was THE topic on cable news this week. Conservatives and liberals alike hailed Paul as he provided Republicans a much-needed morale boost, calling him “a hero” (Rush Limbaugh) and, well, “a hero” (Van Jones on CNN), respectively.

Since cable news now builds itself around elections, particularly Presidential ones, speculation around 2016 (only 1345 days away!) means seeding that tournament now. In addition to Paul, Jeb Bush is a likely 1-seed (and a likely early upset victim), along with Chris Christie and Marco Rubio. Cinderellas include Dr. Ben Carson (someone none of his competitors want to see in the first round), Bobby Jindal, Mike Pence and John Kasich (not exactly a Cinderella, more like a Butler-esque dangerous 5-seed).

Paul’s ability to get conservatives to come out en masse to the polls—Mitt Romney’s ultimate undoing in November—is without question. But how about independents and minorities? Would they (more importantly, the latter) support a Paul ticket?

If clips from an interview Paul did with MSNBC’s Rachel Maddow in May of 2010 are used against Paul, and they absolutely would be, the answer is no. Rest assured, sound bites from the interview–which centered on Paul’s opposition to parts of the 1964 Civil Rights Act–would be played excessively by Hillary Clinton’s media allies, or Joe Biden’s media allies (or Martin O’Malley’s or Andrew Cuomo’s or Mark Warner’s or whomever gets the nomination).

The 2010 visit (via satellite) to Maddow’s show wasn’t the first for the Kentucky Senator. In fact, he once used MSNBC’s largest platform to announce his Senate candidacy one year prior. Still, Paul is no dummy: He knows the tone of any discussion involving any elected Republican who appears on the network (Morning Joe notwithstanding) will be confrontational, a game of gotcha. But Paul is both extremely articulate and confident in his convictions (speaking 13 hours straight this week without relieving himself proved that), so if Maddow tried to back him into a corner, he felt he could easily fight his way out of it.

From the outset, Maddow’s focus for the interview wasn’t to discuss Paul’s fiscal positions, but rather his perspective on civil rights. A few days prior to the interview, Paul took issue with Title II of the Civil Rights Act by telling the Louisville-Courier Journal this:

“I don’t like the idea of telling private business owners—I abhor racism. I think it’s a bad business decision to exclude anybody from your restaurant,” Paul said, “but, at the same time, I do believe in private ownership.”

Maddow, seeing an obvious opening, pressed Paul for the better part of 20 minutes on the private ownership aspect. Paul continued to state that while he was “not in favor of any discrimination of any form,” involuntary integration was a First Amendment issue (See: government shouldn’t be able to dictate how a private business is run). The Senator tried to pivot back to other issues, such as his contention of government overreach via the Affordable Care Act (ObamaCare), but Maddow, like a Golden Retriever with a frisbee, wouldn’t let go.

“You bring up something that is really not an issue…a red herring, it’s a political ploy…and that’s the way it will be used.”

Those last seven words (“that’s the way it will be used”) may prove prophetic. Much like Romney’s 47 percent comment, all it takes is one gaffe, one slip on one sensitive issue for the media to paint your entire candidacy with a very broad, very arbitrary, brush.

Is Rand Paul a racist? Of course not. Even his political opponents wouldn’t make that charge in a culture that drops the R-word at the drop of almost anything. Ultimately his position—a nuanced one—is something that requires actual analysis that lasts longer than eight minutes (an eternity in cable news) and two people (with agendas) talking over each other while not resolving anything.

But the media is too lazy, too sloppy and suffers from too much attention deficit disorder to bother with something as inconvenient as nuance. Instead, its presentation is built around easy sound bites, general good vs. evil themes and basic stories (“Republican Senator ‘opposes’ civil rights! Now wants to be President! Film at 11!”).

And this scenario doesn’t even include racist newsletters published by Rand’s father (also familiar with presidential campaigns) during his 12-year break from politics that included derogatory statements about blacks and gays (Ron Paul steadfastly maintains they were written by someone else, and says he had “no idea” how the comments got into the newsletter in the first place).

As everyone from Gary Hart (Donna Rice in ’84) to Joe Biden (admitted to plagiarism in ’88) to Howard Dean (“I Have a Scream” speech in ’04) to Rick Perry (too many oops to mention last year) learned, running for President changes everything when under the 24/7 national media microscope. Every past comment remotely sniffing controversy is scrutinized, and rarely in a positive way. Rest assured, if a Rand Paul presidential run is announced in 2015, clips of his Maddow interview will appear in every cable show in the country. And Super PAC ads highlighting Ron Paul’s newsletter will be created faster than it will take you to read this column.

Fair or not, his campaign would effectively be over before it started.

Like the NCAA tourney, it would be one and done.

Rand or Ron Paul have not appeared on Maddow’s show since the former’s interview three years ago.

But if younger Paul decides to make a run for the White House, it’s guaranteed you’ll see them on the same screen again.

Albeit, in a campaign commercial near you…