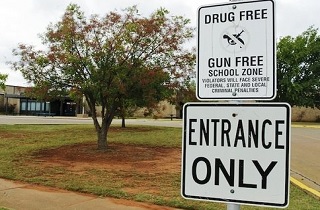 Although the mainstream media seems to have forgotten all about December’s mass shooting in Newtown, Connecticut, and Congress reacted to it by doing nothing, school districts in several states are trying to go ahead with the NRA’s plan to arm teachers and administrators. According to The New York Times, though, such plans are running into a roadblock in some states, as insurance carriers are either refusing to issue coverage for schools with armed employees, or threatening significant premium increases for those who do. The devil in this story, however, is in the details.

But already, EMC Insurance Companies, the liability insurance provider for about 90 percent of Kansas school districts, has sent a letter to its agentssaying that schools permitting employees to carry concealed handguns would be declined coverage.

“We are making this underwriting decision simply to protect the financial security of our company,” the letter said.

In northeast Indiana, Douglas A. Harp, the sheriff of Noble County, offered to deputize teachers to carry handguns in their classrooms less than a week after 26 children and educators were killed in a school shooting in Newtown, Conn. A community member donated $27,000 in firearms to the effort. School officials from three districts seemed ready to sign off. But the plan fell apart after an insurer refused to provide workers’ compensation to schools with gun-carrying staff members.

The Oregon School Boards Association, which manages liability coverage for all but a handful of the state’s school districts, recently announced a new pricing structure that would make districts pay an extra $2,500 annual premium for every staff member carrying a weapon on the job.

The news that insurance companies are resisting these plans is welcome to the majority of Americans who recognize the risks of arming teachers, administrators, and other school personnel, and to opponents of the National Rifle Association. I would count myself among both groups. However, there’s a second part to this story that gun regulation advocates might be tempted to ignore, and which gun nuts will seize upon.

The person who tweeted this story (whose name I failed to note before the tweet escaped my Tweetdeck) used words to the effect that the “free market” had rejected the notion of guns in schools, a clever way to try and make a conservative argument against this silliness. This news is compelling because insurance companies understand risk better than anyone, and with research on gun violence as scarce as it is, these companies are a valuable bellwether. EMC, and the other companies refusing to provide coverage, are saying that the risk of a teacher shooting one of your kids, or allowing kids to get their hands on a gun and shooting someone, is so great that it cannot be mitigated even by a significant premium hike. This should already be obvious, but insurance companies don’t decide these things based on emotion, these are data-driven policies. Insurance companies will insure anything they can make money on.

Later in that New York Times piece, however, it turns out that there are insurance companies that feel they can make money insuring gun-toting teachers:

Dan Barwick, the president of Independence Community College, said his college and two others recently signed a joint insurance plan with another company at a rate that he expected would save the group about $2 million over the next decade. Advocates for arming teachers point to the colleges as evidence that some insurance providers are willing to stomach the risk, should K-12 schools in Kansas decide to shop around

“What will happen is the market will take care of this,” said Forrest Knox, a Kansas state senator who helped pass the concealed carry legislation. “Other companies are going to do the dollars and cents.”

That theory is certainly true in states like Texas, where strong tort protections have made it easier for about 30 districts to arm their employees this year. Dubravka Romano, who oversees a cooperative that insures about half of the state’s 1,035 districts, said schools there were not charged extra for having guns on campus.

That’s the problem with the free market, and the free market argument. Like the dinosaurs in Jurassic Park, money finds a way. Other insurance companies looking to pick off new, very profitable public sector business, can defray this particular risk in any number of ways, or simply eat the risk to get the new business, and figure it out later. No one knows how this bet will actually work out yet, and by the time companies start having to pay out claims, it’s already too late.

More disturbing, though, is that Texas example, which the Times rather clinically chalks up to “strong tort protections,” but which really means that the insurance industry in Texas has managed to lobby for laws that make it hard for you to sue a school district if a teacher shoots your child, or allows some other kid to shoot your child with a teacher’s gun. That’s how the “free market” works; a way to make money exists, and those making the money remove any and all obstacles to it. Insurance companies understand financial risk. If your dead child doesn’t cost them more money than they can make in premiums, then your child doesn’t matter to them.