RNC Uses a Giant Orange Squirrel to Go After Hillary

What do the Clintons have in common with squirrels? They’re nuts! Get it? Lulz.

If you think that’s kinda lame, wait until you see what the Republican National Committee is now utilizing to go after Hillary Clinton as she goes on her book tour: A giant orange squirrel.

Seriously. Look at this thing: 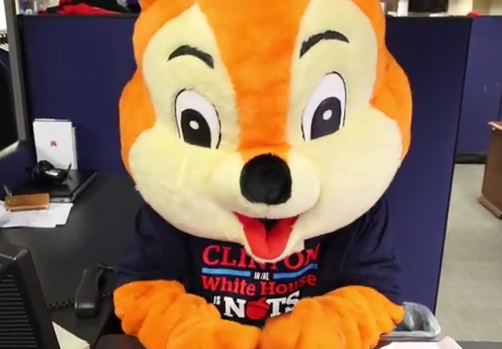 Now, you might be wondering what the GOP is doing with what looks like a Disneyland mascot reject, but here’s the logo on the shirt this squirrel (whose official name, according to the squirrel’s Twitter account, is HRC Squirrel) wears in all its appearances: 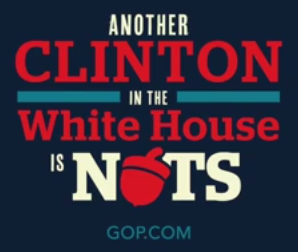 Get it? Because squirrels? And if you love puns, don’t worry. HRC Squirrel’s got plenty of ’em:

.@HillaryClinton is squirrelly if she thinks the Taliban aren't a threat to us. http://t.co/ljkjxgSOZ8

What's the difference between an #Obama presidency and a #Clinton presidency? NUTTIN'

.@TheDemocrats: Even I know not to put all my acorns in one basket.

Fiction usually drives me nuts, but Hard Choices's lies really drive me up a tree. http://t.co/RWwdqf5OYv

The squirrel suit is a “recycled” bit (the RNC’s own words to Mother Jones) that was previously used to lambast the controversial community organizing group ACORN prior to the 2008 election. And now it’s being used on Hillary, presumably in advance of 2016.

Watch an RNC video featuring the squirrel below, which includes a cameo from RNC Chair Reince Priebus, who for some reason greenlit this: