Robert Redford On Sarah Palin: ‘Part Of Her Strength Is How Limited She Is’ 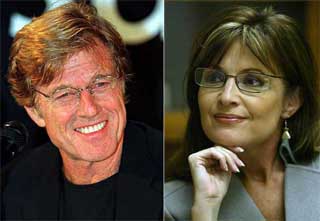 In an interview to promote his new film The Conspirator, Robert Redford had some interesting thoughts on Sarah Palin as well as her followers. Ouch. It’s one thing to get picked on by the Bill Maher’s and David Letterman’s of the world. I mean, that’s gotta stink but a public figure can get over it. However, to get dissed by the freakin’ Sundance Kid. Now that’s got to hurt.

The interview was for Aol’s PopEater and the comments in question came as the discussion turned to Redford’s great film Quiz Show (if you haven’t seen that one, you’re missing out) about the quiz show scandals of the 1950s. Here’s what he had to say and how it got back to Mama Grizzlie:

POPEATER: Well I find it sad that Sarah Palin insinuates that higher education is elitist. I can’t work that one out.

REDFORD: Well, I can because the country is made up of three categories. Traditionalists, cultural creative people and the moderns. The moderns are the hi-tech Silicon Valley people. The traditionalists on the lower end of it are the people who don’t want change, they’re afraid of change therefore they have anger. The fear card is a very big powerful card and when you have people afraid of change; they’ll do anything to prevent it. They’re doing it because they’re limited, frightened of people who are not as limited. I think Sarah Palin, part of her strength is how limited she is.”

So, everyone, which category do you fall into? I know that I’m clearly a modern because I recently figured out how to set my DVR from my phone! It only took me 40 minutes of trying!

The whole interview is pretty interesting (it is Robert Redford). You can read the rest here.