Roger Ailes’ Complicated Legacy: He Invented News As We Now Know It, For Better and Worse 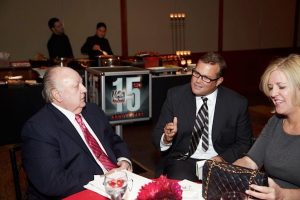 I interviewed Roger Ailes in 2011 and found him to be cautiously charming and surprisingly warm. His staff, however, feared him like nothing I’ve ever seen.

I had been invited to cover Fox News’ 15th Anniversary celebration. At a time where their ratings, revenue and relevance had never been higher, I was surprised to learn that I would have an audience with the visionary himself. I will admit to being nervous, having read unsubstantiated rumors about his mien. So after meeting him and his wife seated at an entire ball room that was being used as his green room, I opened with a joke.

“So, you work at Fox News?” I asked. I play a very convincing dumb guy.

For a split second I had him. He looked at me like I was the stupidest guy he’d ever met before realizing I was just joking. He smiled, let out a small laugh and jumped in on the joke saying “yeah I help out around here.” I had him.

I understand that the version of Ailes that I met was certainly a crafted one, designed for an outsider journalist that he couldn’t really trust, dumb jokes or not. But he was open and eager to chat about how he saw Fox News, his staff and programming. And while his legacy is super complicated — and ended on the most sour possible note imaginable — his vision of how news and opinion can be delivered in an entertaining fashion will forever change the way we consume it.

A few things stood out to me in meeting Mr. Ailes and his staff. One: They were extremely proud of their ratings success and their patriotism. It was never said directly, but the “leitmotif” in many of my conversations with many (not all) Fox News staffers that night was that the country was going to hell in a hand basket under the Obama administration, and Fox News was the last guardian keeping the barbarians out of the gated communities in which many of their viewers resided.

But the pride in their influence and success was second to the satisfaction everyone felt as the villains, or underdogs in the political and cable news landscape at the time. It was very fashionable, especially at New York cocktail parties at the time, to hate Fox News. Still is frankly, though to a lesser degree. And Ailes and staff really relished that position. Don’t hate the players, hate the game.

Further, Roger told me that he would NEVER hire staffers from the Ivy League schools that he derided. He wanted a hungry and scrappy team working for him, that came from lesser established schools like St. Johns, Hofstra, Ole Miss and the like. He didn’t say this exactly, but he wanted people with a chip on their shoulder, men and women who laughed in the face of the media elite. And it worked. Whatever you think of Fox News programming, they were on the front foot for much of the aughts, pushing their competitors to a place of very little relevance.

It was a weird mix of confidence and neurosis. “We are number one!” but, also the underdog that no one likes and cheers for. Sort of a perfect metaphor for what eventually led to the “Make America Great Again” ethos that is equal parts pride, anger and grievance that things are not just and should be fixed.

Ailes left the stage of cable news surrounded by horrible allegations and rumors, none of which he ever admitted. There is no question those allegations and substantial legal settlements will be a defining part of his legacy.

But putting that rather enormous part aside, Ailes’ vision for how news and politics can merge in a very entertaining and influential manner will be studied for decades to come, in much the same manner current journalism students research William Randolph Hearst. As I wrote in 2009, Roger Ailes was the most powerful political person in America. And even though he has now passed, we are still feeling his influence in the media landscape, perhaps more than any other individual currently. The legacy of his vision is that strong. He saw a liberal media bias and decided to provide the other side of the coin, but not before very shrewdly proclaiming the genius tag line “fair and balanced.”

By many accounts he was a bully and bad guy, especially towards women who worked for him, and that will forever define him. In an age of overly hyperbolic comments and commentary, one cannot underestimate Ailes’ influence in today’s media landscape.

For better and for worse.