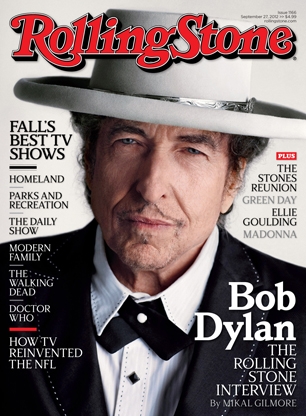 Whenever Bob Dylan decides to give an interview, it becomes a monumental event. Despite being one of the most important American social figures of the last 50 years, Dylan has always been reticent with the press and, at times, outright hostile to their ceaseless prodding. Snagging an interview with Dylan is almost as impossible as spotting Sasquatch (although getting him to make a cameo on Pawn Stars apparently isn’t that difficult).

The latest edition of Rolling Stone features one of those rare interviews, timed with the release of Dylan’s 35th studio album Tempest. Interviewer Mikal Gilmore spends most of the time asking decent questions about the legendary musicians’ life, including accusations of plagiarism that arose from Dylan’s 2001 record Love & Theft (Dylan says: “wussies and pussies” make such claims about him).

But for another chunk of the interview, Gilmore spends an uncomfortable amount of time prodding Dylan to confirm his support for President Barack Obama and label the president’s critics racist.

The discussion first got political when Dylan expressed his belief that slavery has unfortunately stained this country’s fabric since its founding: “This country is just too fucked up about color,” he said. “People at each other’s throats just because they are of a different color. It’s the height of insanity, and it will hold any nation back – or any neighborhood back,” he continued before explaining that perhaps if slavery had ended in a more peaceful way, we would have progressed faster in terms of race relations.

Gilmore then saw an opportunity to ask whether he believed the Obama presidency would signal an important sea change in American race relations. “I don’t have any opinion on that,” Dylan responded. “You have to change your heart if you want to change.”

Unsatisfied, Gilmore came right out with what he really meant to ask: Isn’t the backlash against Obama rooted in racism? “I don’t know,” Dylan said.

Gilmore then took a few more swings, mentioning that Obama’s critics call him a socialist and un-American. Dylan responded: “[A]s if you’ve never heard those kind of words before. Eisenhower was accused of being un-American. And wasn’t Nixon a socialist? Look what he did in China. They’ll say bad things about the next guy, too.” 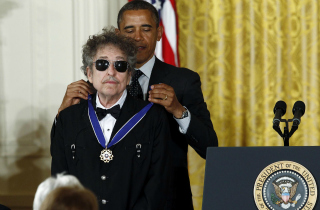 When Gilmore tried for a fourth time to elicit a they-hate-him-because-he’s-black response out of Dylan, the musician said: “Do you want me to repeat what I just said, word for word? What are you talking about? People loved the guy when he was elected. So what are we talking about? People changing their minds? Well, who are these people who changed their minds? Talk to them.”

As the bizarre exchange continued, Gilmore asked whether Dylan votes. Seemingly scoffing at the question, Dylan responded with the generic: “We live in a democracy. What do you want me to say? Voting is a good thing.”

Then Gilmore wanted to know what Dylan thinks of Obama. The musician has met the president several times, most recently when he was honored at the White House (while wearing sunglasses indoors!) with the Presidential Medal of Freedom. At first Dylan remarked that “You should be asking his wife what she thinks of him,” and then he grew understandably cranky with the interviewer: “He loves music. He’s personable. He dresses good. What the fuck do you want me to say?”

Oh, but it doesn’t end there! Gilmore tried again, asking whether Dylan would like to see Obama re-elected. “I’ve lived through a lot of presidents! And you have too! Some are re-elected and some aren’t. Being re-elected isn’t the mark of a great president.”

Gilmore then brought up the time Dylan said, while on-stage the evening of Obama’s inauguration, “It looks like things are gonna change now.” Clearly Gilmore wanted Dylan to profess his love of the president, but instead the musician said: “Did I go down to the middle of town and give a speech? […] I don’t know what I could have meant by that. […] I’m not going to deny what I said, but I would have hoped that things would’ve changed. I certainly hope they have.”

Reason‘s Brian Doherty has likely the most accurate analysis of Gilmore’s prodding:

It all feels peculiarly quasi-totalitarian–you must praise the Great Leader!–as well as sad and childish, like Gilmore can’t get through a meeting with one of the major cultural forces of his time without getting that force to ratify Gilmore’s political beliefs, like Dylan’s his cultural dad whose approval must be sought for a political love that maybe even Gilmore is seeing is based in little concrete.

Dylan’s refusal to join in on political idol worship really shouldn’t surprise anyone. For decades, he has been resistant to political pigeonholing from both sides.

Left-wing folkies thought they owned him in the early ’60s, but then he went rogue and seemingly denounced the hierarchical madness of the movement via songs like “Maggie’s Farm” and “My Back Pages.” At one point he became reclusive, shrugging off the left-wing countercultural icon label that had been placed upon him: “Like Abraham destroying his father’s idol shop, only it was my own idol shop,” he said. 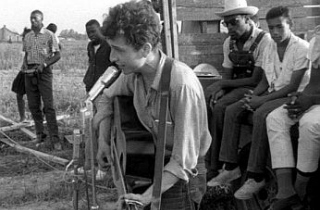 He has also confounded the left with a retroactive statement of positive feelings for Barry Goldwater; a bizarre (but somewhat brief) foray into evangelical Christianity; and his 1983 song “Neighborhood Bully,” a not-so-subtle defense of the State of Israel.

But he is no right-winger either. Many of his songs scorn the military-industrial complex (“Masters of War,” “With God on Our Side”), and others rail against a criminal justice system favorable to white people (“Hurricane,” “The Lonesome Death of Hattie Carroll”).

His reluctance to play the game should serve as inspiration for those of us who feel disillusioned with a two-party system that has become, at its core, a competition amongst used car salesmen. Platitudes are exchanged, harsh words are spewed, the promise of “reform” is parroted over and over again, but nothing ever really changes. And if it does, it’s not because some politician in a big office made it so.

“Politics is entertainment,” he once told the UK Telegraph. “Politicians are interchangeable.”

Although political candidates of all stripes have endorsed him, we can be thankful Dylan will likely never endorse them.