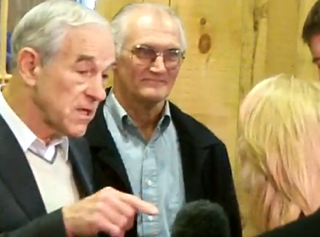 A Ron Paul Super PAC is calling upon CNN reporter Dana Bash to be taken off his campaign beat following alleged biased comments she made saying the candidate would end up hurting the eventual nominee. “I’m sure you talk to Republicans who are worried as well, just like I am,” Bash said in her offending comments. “That Ron Paul will continue on long into the spring and summer…He could really hurt whomever the Republican nominee is because, still, nobody thinks, even if he does well here in New Hampshire, that he will ultimately be the nominee.”

“In America, voters rely on the media to provide objective reporting,” responded Revolution PAC Chair Gary Franchi. “Editorializing like this obviously influences public perception and has no place in a hard newscast.”

“Dana Bash’s statements are particularly disturbing,” Franchi added, “Because they fly in the face of established facts. General election polling consistently shows that Ron Paul – because of his unmatched appeal to independent and disaffected democrat voters – is the only viable candidate against Barack Obama. It is clear, when the Paul Camp has to end interviews early with her, that Dana Bash is tainting coverage of this election and deserves a reassignment.”

Fox News’s Geraldo Rivera came to Bash’s defense, saying: “Anyone bashing Dana better not say it in front of me. She’s a great reporter, fair, balanced. Her hubby’s a fave Lay off”

UPDATE: CNN has issued a statement on the situation. “The notion that Dana is anything but objective is preposterous. Dana’s report should be fully reviewed in the context in which she meant it-to reference John’s sources and her sources, not her own opinion. Keep in mind, Dana was the only reporter that Rep. Ron Paul chose to conduct an interview with last night after winning second place in the NH primary. That should speak for itself.”

Watch Bash’s offending statement regarding Paul below via CNN: