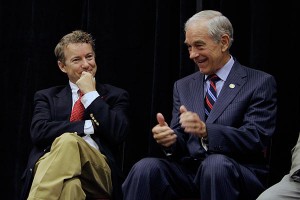 I’m going to start this column out with a piece of quasi-relevant trivia: the theme song to Monty Python’s Flying Circus is excerpted from “The Liberty Bell March” by John Philip Sousa, a famous American composer. The reason for this is very simple. The song was, and still is, in the public domain, which means they could use it royalty-free. I bring this up to provide some context to a truly puzzling part of the internet freedom manifesto released this week being supported by Ron Paul and his son Rand Paul. Most of the ideas laid out in the manifesto fall neatly in line with their libertarian ideals, but it’s the part where they rail against the public domain that confuses me, particularly considering their vocal opposition to SOPA and similar legislation.

RELATED: If A Bill Threatens The Internet And No One Is Around To Notice, Whose Fault Is That?

The manifesto, obtained exclusively by BuzzFeed, lays out specifically what the Pauls will stand for in the great internet debate, and what they won’t. It celebrates the technological innovations made in the private sector over the past decade while bashing the sinister “internet collectivists.” The manifesto warns that the most “insidious” tactics of these collectivists are “attempts to control and regulate competition, infrastructure, privacy and intellectual property.” Keep that last part in mind as you read this next block of text, which is from the mouth of the collectivists:

Private property rights on the Internet should exist in limited fashion or not at all, and what is considered to be in the public domain should be greatly expanded.

So private property rights are under attack and there is inherent danger in expanding the public domain? I’ll let TechDirt’s Mike Masnick explain the problem here:

Considering the Pauls were both instrumental in the fight against SOPA and PIPA, you would think that the two of them understood how copyright law is massively abused and how beneficial the public domain is. But apparently not… Earth to the Pauls: copyright is a massive government-granted monopoly privilege. That’s the kind of thing we thought you were against, not for.

The copyright lobby in this country is, to put it bluntly, a gigantic monster with so much power it puts other Washington lobbies to shame. The whole SOPA mess was an exercise in aggressive lobbying, and the only reason it didn’t work was because the internet stood up as one to stop it. And when Masnick says that copyright law is abused, he’s not kidding. For example, back in May, Mediaite’s sister site Geekosystem detailed how Jay Leno once ran a funny YouTube video on his show, and a few years later, the original video was taken down because NBC claimed copyright on it. Take a moment to process the stupidity there.

But if the Pauls are somehow convinced it’s private property rights that are being threatened as opposed to the public domain, they’re way off the mark. If anything, the public domain is being more threatened these days. Let’s jump back to the beginning, where I brought up the whole “Liberty Bell March” example. According to the website Public Domain Information Project, “music and lyrics published in 1922 or earlier are in the Public Domain in the United States.” When something is in the public domain, no singular person or entity can claim ownership of it, which means we all get to use it. Let’s say you have a video project you want to work on and need some music you can use, but need more than the 30 seconds of fair use. Just search for music that’s in the public domain and boom, you can use it without worrying about anyone claiming copyright.

But this past January, the Supreme Court ruled that Congress now has the power to re-copyright works that are already in the public domain. Copyrights expire, but now Congress can renew copyright licenses. Here’s some context for the case:

The top court was ruling on a petition by a group of orchestra conductors, educators, performers, publishers and film archivists who urged the justices to reverse an appellate court that ruled against the group, which has relied on artistic works in the public domain for their livelihoods.

They claimed that re-copyrighting public works would breach the speech rights of those who are now using those works without needing a license. There are millions of decades-old works at issue. Some of the well-known ones include H.G. Wells’ Things to Come; Fritz Lang’s Metropolis and the musical compositions of Igor Fyodorovich Stravinsky.

It was a 6-2 ruling, with Elena Kagan recusing herself and liberal Stephen Breyer joining conservative Samuel Alito in dissent. The case was brought to the Supreme Court thanks to a petition by orchestra conductors, publishers, film archivists, and other artists who said keeping works in the public domain is how they maintain their livelihoods.

Now, obviously there are and should be limits to the public domain. Over a year ago, Cooks Source magazine stole an article from a writer and repurposed it, unsourced, for their own use. The writer complained, and this is the incredibly stupid response she got.

I do know about copyright laws. It was “my bad” indeed, and, as the magazine is put together in long sessions, tired eyes and minds somethings forget to do these things. But honestly Monica, the web is considered “public domain” and you should be happy we just didn’t “lift” your whole article and put someone else’s name on it!

No. The internet as a whole is not public domain. Just because something is on the internet does not mean it is up for grabs. In this respect, I can understand why the Pauls care about protecting private property rights on the internet. Intellectual property protects artists from people just blatantly stealing their work without compensation and/or attribution. But intellectual property rights have been so misused and abused by the copyright and entertainment industries that the scale is being heavily tilted in one direction, and not the direction the Pauls think it’s going in.