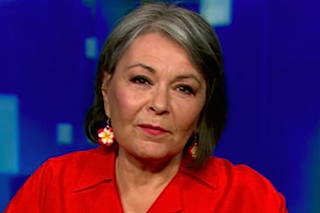 Roseanne Barr, who tried to run a the Green Party candidate for president in 2012 before securing the nomination of the Peace and Freedom Party, is not ready for Hillary Clinton. In a new interview with the Daily Beast, the comedian laid out exactly why she thinks Clinton would make a bad president — and how she could do better.

“I think she’s a Democrat just like they all are. She seems like every other Democrat,” Barr said of Clinton. “I would not like to see her win. She’s the same old shit. I’d like to see me win. I don’t see how she can win, but it will be interesting to see how the process goes — although its kind of offensive that the American people for 21 months have to live through the mudslinging that goes on between the two parties, which I think is just a tactic to prevent government from doing anything about any of our problems.”

While the idea of a female president didn’t do much to excite her, Barr did say that a “party that was woman-friendly would be revolutionary, and that party could be headed by a male or female.” Republicans and Democrats like Clinton “both get paid by the same guys,” she added. “They do the same thing, they want the same stuff, more business.”

“I would rather see the first intelligent, honest American president. I don’t care what’s in their shorts. I don’t care what it looks like down there at all,” Barr continued. “The thing I did like Hillary for was that she was the first candidate who ever listened to what women said, because she had to.”

As for President Barack Obama, Barr has more or less written him off as well after some initial hope. “But he’s just another corporate Democrat like they all are,” she said. “He rushed to give the banks their bailout. They’re all the same, they work for big money.”

If Barr did decide to run again, she said she would do it as the head of a new, “Green Tea Party,” which she described as “a hybrid of freedom and safety net.” She added, “That’s what I think the future is all about: a limit to government size and power, government made efficient.”

Read the full profile at dailybeast.com.