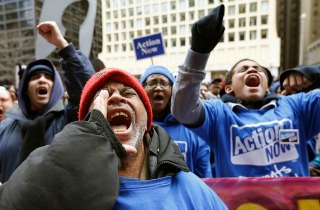 You can gauge the scope of a movement’s influence by the causes they adopt, and the cultural left has set their sights pretty low in recent months. And, yet, even with the targets of the progressive movement’s outrage reduced and their goals seemingly manageable, they have failed to secure even a modest victory.

Take, for example, the latest row over former Washington Post “WonkBlog” columnist Ezra Klein’s decision to hire a young writer by the name of Brandon Ambrosino for his new venture, Vox Media. Klein’s hiring of the 23-year-old aspiring writer for a one-year fellowship inspired a backlash utterly disproportionate to the scale of his infraction.

And what was his infraction? Ambrosino, an out gay man, refused to conform to the expected stereotypes to which progressives believe a gay man should kowtow. Worse still, he challenged and disconfirmed their biases on a regular basis.

Ambrosino’s primary offense was to pen for The Atlantic a confessional post in which he revealed his experience coming out while a student at the staunchly conservative Liberty University –- a school founded by evangelical preacher, Dr. Jerry Fallwell. Ambrosino admitted that he expected to be confronted with anti-gay bias when he came out. But he found that the opposite was true:

Ambrosino even confessed he was “shocked” that his own biases were not confirmed when he admitted to teachers and fellow students that he was gay.

Ambrosino compounded his sin in the eyes of the reactionary left when he defended the likes of Alec Baldwin who was accused, himself, of being a homophobe when he used anti-gay slurs in one of his regular fits of rage. But an actor who has enjoyed a storied career in New York City’s theater scene, Ambrosino thought, is unlikely to be a bigoted caricature.

The aspiring Vox writer even drew attention on his Twitter account to a story in the New York Times which chronicled the stories of “ex-gay” men who assert that they have decided to pursue controversial therapy to move on from their sexual preference. He did not even express perfunctory disapproval of these people’s lifestyle choices! How intolerant.

“Ezra Klein’s much-hyped news and policy site, Vox.com, has hired Brandon Ambrosino – a gay man who has made a name for himself by suggesting that being gay is a choice and whitewashing anti-gay bigotry and discrimination,” declared Media Matters writer Luke Brinker. “Klein’s new venture – announced to considerable fanfare in January – will provide Ambrosino a formidable platform as the go-to gay writer for anti-gay conservatives seeking to legitimize their homophobia.”

“Ambrosino’s ideas are not brash, unconventional, exciting, or avant-garde. They are reckless, retrograde, and vapid—and hiring Ambrosino reflects startlingly bad, potentially catastrophic judgment by Vox,” Slate’s Mark Joseph Stern averred before declaring Klein’s newest hire’s work to be “an embarrassment to us all.”

The left, as they often do, sought a scalp. And, in what is becoming a welcome trend, they were ignored.

Klein, a like-minded center-left policy blogger, took to his Facebook on Thursday to defend his hiring decision. He beseeched — practically implored — his ideologically simpatico audience of supposedly tolerant liberals to practice what they so often preach; though not before issuing effusive mea culpas for violating the unspoken tenets of liberal conformity.

It is not the first time in recent weeks that the left has called for heads to roll and been placated before being altogether disregarded. In December, Duck Dynasty star Phil Robertson became the target of similar mob justice. Boycotts were organized, demands were made, and the ideologically like-minded entertainment executives at A&E briefly consented to their demands.

But only briefly. Following a much greater backlash over the network’s decision to banish to the wilderness the nearly septuagenarian Louisiana resident, who had not yet mastered the ever-shifting demands political correctness imposes on speech, A&E went back on their pledge.

There was outrage from the cultural left over A&E’s betrayal, but the issue rapidly faded from relevance.

The lesson is becoming clear: the perpetually aggrieved can be, and often are, safely ignored. A once powerful movement, which apparently sees its relevance sustained only by the number of careers it is able to end, has been almost entirely marginalized, even if they do not recognize that fact yet. They have become as effective as those foolish cultural conservatives who were moved to boycott Coca-Cola over a harmless, multi-cultural Super Bowl ad –- which is to say, not at all.

But the cultural left’s predicament is worse than that of the cultural conservatives’. The social conservative is reminded regularly by coastal media and entertainment elites that his views are far from vogue. The progressive bounty hunters are, however, utterly convinced of their relevance and have their views regularly reinforced by their most influential contemporaries.

Even with targets as soft as Robertson or Ambrosino, the left has been unable to convince others to see things their way. And that’s a wholly good thing. You don’t have to agree with the views expressed by these individuals to know that trying to get them fired is antithetical to the notion of tolerance.

A tolerant movement commands moral authority, and a movement with moral authority commands influence. The cultural left has made a decision to surrender both in favor of uniformity and unanimity.