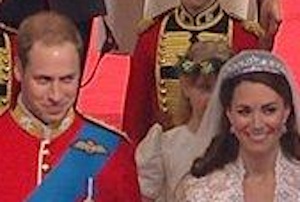 Watching the wall-to-wall royal wedding coverage on the network morning shows and cable news networks this morning, it is easy to forget that every one of them is supposedly run by a “news” division. Wall-to-wall is not figurative term but a literal one. Give the people what they want right?

But wait, a recent poll by the New York Times and CBS found that about 28% of Americans were following the wedding of Prince William and Kate Middleton “very closely” or “somewhat closely,” a number that eclipses even the rosiest estimates of NASCAR fandom. Now, imagine if every NASCAR race of the past 20 years happened on the same day.

Yes, it has become fashionable to bash the saturation coverage of the royal wedding, but the the problem isn’t with the amount of coverage, or even the expense, but with what it costs us. This spectacle illustrates the degree to which profit-driven “giving the people what they want” has undercut journalism’s true purpose.

There was a time, though, when you could have a gloriously decadent royal wedding cake, and eat it, too, by having a news media that devoted adequate resources to fulfilling its public service obligation. But times have changed, and so too have the apparent strategy of network news. Former Observer EIC Kyle Pope summed it up best on a recent tweet, writing “The big TV networks show their true stripes, investing hugely in royal wedding coverage while letting their foreign bureaus die.”

Yes, by any measure, the decision makers at both network and cable news divisions went long on the royal wedding, spending millions of dollars of the very budget that they constantly carp about being so diminished. And remember lay-offs of the last year? Think of the poor news producer who was recently let go due to a lack of funds, who must be thinking “I was fired for this?!”

The thinking behind the news director’s decisions is crystal clear; British royalty (particularly with regards to Princess Diana) was big media business in “the Colonies,” and so the thinking is that we will collectively be very interested in the next Princess. Given the difference in the times, and the public hits that the Monarchy has taken in the interim, it’s doubtful that Kate Middleton will ever get to Princess Di status. In much the same way, we are unlikely to enjoy an omnipresent news media with resources in every corner of the world.

Of course, there were only three (real) channels back then, and only sixteen or so programming hours to fill. E! was just another letter in the alphabet, Bravo was just something you hollered at the opera, and MTV was just a jukebox with pictures. You didn’t have to do much more than point your camera at the happy couple to be guaranteed a huge audience. Nowadays, the fierceness of the competition is manifested in amped-up graphics, increasingly tangential guest “experts,” and a crowding-out of…everything else. Especially — and rather sadly — real news coverage.

But its not just the news media, the media watchdogs are largely complicit. Even the thoughtful Poynter Institute collected Twitter reactions from a various media critics, and nary one was actually critical of the coverage, nor questioned the gross amount of overkill involved.

The recent Tornado disaster in the Southern part of the country perfectly illustrates the stark disconnect between NY based news staffers and, well, the rest of the country. Over 300 people have died as a result of this catastrophe, but the cable news networks have all reported more on the royal wedding than the tornadoes in the South, judging by a topic search on TV Eyes. Don’t worry though, real-time reports on the devastation in the South could still be found…by civilians on the ground uploading videos and reports via YouTube and Twitter. Is it any wonder that so many Americans so deeply distrust the American media?

One can cynically presume that many in the news business saw a trip to London (vis-à-vis the royal wedding) as a classic media boondoggle. And while its too soon to know the ratings and how this investment has paid off, the coverage does feel a little shoved down our collective throats right now. With apologies to Steely Dan, it all feels a lot like the royal scam.