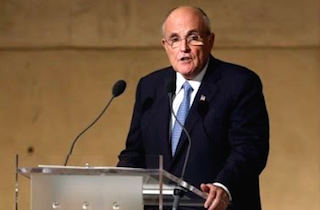 During a series of interviews last week following his controversial comments about President Barack Obama not “loving” America, former New York City Mayor Rudy Giuliani swore up and down that he had no plans to apologize or reverse his position on the matter. But as more and more Republicans began to distance themselves from what many saw as an inflammatory statement, he decided to walk it back, ever so slightly, in an op-ed for the Wall Street Journal (paywall restricted).

“My blunt language suggesting that the president doesn’t love America notwithstanding, I didn’t intend to question President Obama’s motives or the content of his heart,” Giuliani wrote. “My intended focus really was the effect his words and his actions have on the morale of the country, and how that effect may damage his performance.”

Later, he explained, “Irrespective of what a president may think or feel, his inability or disinclination to emphasize what is right with America can hamstring our success as a nation. This is particularly true when a president is seen, as President Obama is, as criticizing his country more than other presidents have done, regardless of their political affiliation.” At the same time, he praised Presidents John Kennedy, Ronald Reagan and Bill Clinton for possessing “the ability to walk a fine line by placing any constructive criticisms regarding the ways the country might improve in the context of their unbending belief in American exceptionalism.”

“Obviously, I cannot read President Obama’s mind or heart, and to the extent that my words suggested otherwise, it was not my intention,” Giuliani admitted, despite the fact that he said definitively of the president, “He doesn’t love you. And he doesn’t love me.”

Then, he referenced 9/11 and defended torture. “I can only be disheartened when I hear him claim, as he did last August, that our response to 9/11 betrayed the ideals of this country,” the former mayor wrote. “When he interjected that ‘we tortured some folks,’ he undermined those who managed successfully to protect us from further attack.”

So, while Giuliani may be trying to temper his comments a bit after an unexpectedly impassioned backlash, he still believes Obama possesses a “stark lack of moral clarity.”