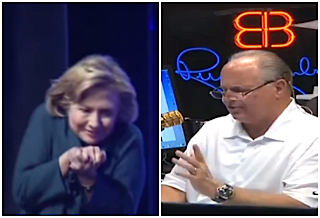 On Monday morning, Rush Limbaugh decided to agree with one of his callers who argued that last week’s Hillary Clinton shoe-throwing incident was “staged.” Joining the “shoe truthers” — as Talking Points Memo’s Sahil Kapur has dubbed them — said he’s inclined to believe the moment was staged, even though he has not even seen the video.

The caller’s theory was based on Clinton’s “little girl” reaction to something that she said should have made the former secretary of state feel more “fear and anxiety.” Limbaugh admitted to the woman that he hadn’t seen the video — only the still photo on The Drudge Report — but based on that he agreed with his caller’s assessment.

“I can totally relate to those who believe that everything the Clintons do is staged or choreographed,” Limbaugh told is audience. “But I’m sorry, I’m ill-equipped to comment, I haven’t seen it,” he added, saying he hasn’t “cared enough” to seek it out

“Maybe it’s because, in my subconscious, I think it was staged, or set up, or whatever,” he said. “I don’t know why anybody would be throwing a shoe at Hillary unless maybe it’s an attempt to make the Benghazi people look like nuts and lunatics and wackos.”

In addition to Limbaugh, Washington Free Beacon editor Sonny Bunch disputed the “typical liberal media” take on the incident, arguing that Clinton does not “dodge” the shoe in the video, as many outlets reported but rather “flinches after it has gone whizzing by her head.” Picking up on Bunch’s point, The National Review’s Jonah Goldberg added, “I don’t expect reporters to say ‘Hillary Clinton instinctively cowered from shoe like it was the unavoidable truth about Benghazi.’ But, as the guy who was hit by a Ford pickup truck told the police, that was no Dodge.”

You can watch video of the shoe-throwing incident below, via Fox: