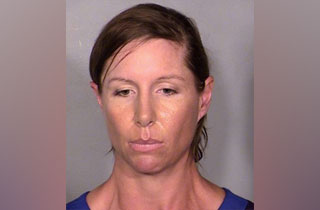 As more details emerge about Allison Michelle Ernst, better known as the Hillary Shoe Thrower, police discovered a strange connection between her and James Egan Holmes, the man allegedly responsible for the 2012 Aurora movie shooting. According to Colorado police, Ernst seemed to be unhealthily obsessed with Holmes, to the point where she filed a rambling lawsuit against him for “entering [her] mind through subliminal messaging and causing [her] to be obsessed with him on a daily basis.”

Ernst, 36, was arrested for, but not charged with assaulting Hillary Clinton during a speech last week in which she hurled a shoe at the former Secretary of State. However, Ernst has a history of erratic behavior: back in 2012, Ernst, boasting a red dress and a shaved head, broke into a Colorado courtroom during one of Holmes’s hearings and declared that she had “information vital to the defense of James Holmes to the public defender,” before being escorted out.

Later, via her own personal website, she filed a lawsuit against the imprisoned Holmes, claiming that he had been stalking her through “mind manipulation,” though she also claimed he was innocent:

James Holmes is innocent and has been framed by the u.s. govt for new world order… James has taken over my life. I sleep, eat, and think James Holmes 24/7 and i seek a restraining order to have this james holmes mind manipulation to stop. I watched inception, so I’m fully aware of james holmes magical powers and also his neuo science studies which now james enters my head like dennis quaid in innerspace and he zooms to my heart and plays with it and forces me to care for him. James sent me naked photos of himself in a joker outfit which offends me. James Holmes wont even look at me on when he is in court and this offends me, my life and skin.

She also believed that the US government was attempting to “Tim McVay” him:

Tim McVay was the man accused of the Oklahoma City Bombing. Much like James Holmes, he was a mind controlled patsy that they dumped the blame for the bombing on and even after proof of other accomplices emerged they were able to keep the death penalty case together. This so called team of lawyers are either the worst lawyers in the world or have been purposely put in to lose the case for the defense.

While it’s clear that Ernst needs help, and we sincerely hope she gets it, the last line of her lawsuit is somewhat ironic:

I also seek a new red dress and clippers including toe nails.

You can watch video of the shoe-throwing incident below, via Fox: