Rush Limbaugh: Baltimore Is Getting the ‘Benghazi’ Treatment 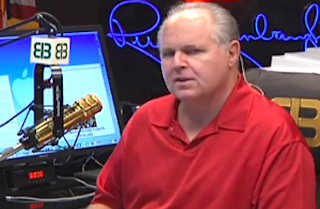 As protests continued to escalate this weekend over the death of Freddie Gray, whose spine was allegedly severed while in police custody, Baltimore Mayor Stephanie Rawlings-Blake made the unlikely request that her police department “give those who wished to destroy space to do that.”

This concept was expectedly mind-blowing to Rush Limbaugh, who called it “one of the most disqualifying statements ever made by a politician,” adding, “I mean, there’s no rational explanation for that.”

Soon, Limbaugh brought his commentary to the next level by making a somehow inevitable Benghazi analogy. “Baltimore is getting the Ambassador Stevens treatment in Benghazi, and that, of course, is pioneered by Hillary Clinton and Barack Obama,” the host declared. “So Baltimore, like our ambassador in Libya, was left unprotected and undefended, and those who wished to destroy were given space to do it because on balance — and that’s what this is all about, she said — on balance that’s the safest way to go.”

Just to be clear, in this analogy, the city of Baltimore is Ambassador Chris Stevens and the three other Americans who died in Benghazi in 2012 and the protesters angry over the death of Freddie Gray are the terrorists.