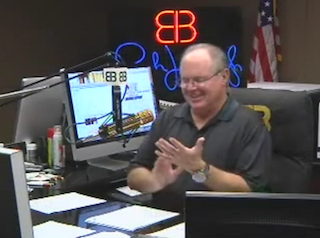 I may be the first person to ever say this but, thank God video of Rush Limbaugh recording his radio show streams online. Sure, it may not be the most visually interesting thing to watch. It is, after all, just Limbaugh sitting at a microphone. However, it’s all worth it to see today’s moment of Limbaugh trying and failing to contain his laughter when a caller named Vicky begins speaking ebullient praise about Donald Trump’s balls. “I don’t understand, what do you mean?” asked Limbaugh, giggling like a schoolboy.

Of course, besides the juvenile playground fun (which was great enough in its own right), there was an actual interesting conversation Limbaugh had with Vicky. While she greatly respects Trump’s testicular fortitude (listen as says the word “balls” as if it has four syllables made up entirely capital letters), she actually hates the man as a Republican candidate, denouncing him as a “media whore” and “not a real conservative.” She wondered why the Republican party couldn’t get someone who walked the walk as much as Trump talked the talk, saying the names “Dole” and “McCain” with as much disdain as she had enthusiasm for “balls.”

Limbaugh agreed, acknowledging that Trump has a “skewed view” of conservatism. However, he explained that the Republican nomination process is run like any business; a caste system forces people to wait their turn even if they’re more qualified for the job. He made sure to point out wasn’t defending it, rather that’s just the way it is.

However, the real draw here (for all of us with the hearts of 12-year-olds) was all the talk of “balls” at the beginning. And, if you think I’ve been gratuitous in my usage of the word in this post, let me point out that I’ve used it four times which is the same amount it was said on the show. So, not gratuitous. Merely reflexive.

Ok, that last one was gratuitous.