Rush Limbaugh Goes on the Offensive Against Media Matters Executive 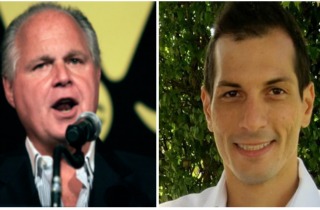 Conservative websites The Daily Caller and Breitbart published reports Tuesday that dredged up the old personal blog posts of an executive at the liberal watchdog organization Media Matters for America.

Both reports highlighted posts from Angelo Carusone — the executive vice president of MMFA, who is also the brains behind campaigns to silence some anti-Obama voices in the media like Glenn Beck, Donald Trump and, most recently, Rush Limbaugh — in which he says some mildly racy things by MMfA standards.

On the blog, which hasn’t been updated since 2005, Carusone refers to his boyfriend’s “jewry”; he says that gay men on Long Island are “ugly”; and, perhaps most objectionable, he rants about a Bangladeshi “tranny lover.”

Another revelation: Carusone was once an admirer a former Secretary of State Condoleezza Rice and conservative Supreme Court Justice Antonin Scalia.

The clear purpose of The Daily Caller and Breitbart’s reports is to discredit Carusone and, by extension, MMfA, which routinely picks out the potentially offensive or insensitive things Limbaugh and other conservatives say in public.

“Angelo Carusone is a self-fashioned arbiter of the words of his political opposition, and leader of the extremist advocacy to target and bully advertisers of conservative programming,” a spokesperson for The Rush Limbaugh Show told Mediaite. “So, who will hold him accountable for his words, taken literally from the pages of his own writing? His ideas paint a picture very different from the public personality he cultivates, and are far more extreme than anything he has used as a basis for harassment of others. Isn’t it clear that ‘Stop Rush’ is not principled advocacy, but a bully pulpit of hypocrites?”

There you have it.

Taking some of the wind out of the sails on this attack, however, is that Carusone joined MMfA in 2010, according to his LinkedIn profile. That’s five years after his blog posts.

But would MMFA take a lapse of time into account if, say, a Fox News producer penned a five-year-old blog post calling Michelle Obama the c-word?

We requested comment from both Carusone and Media Matters.