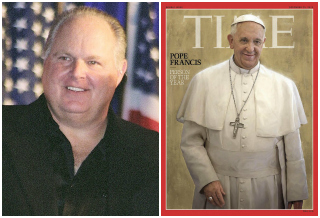 Rush Limbaugh is not happy that TIME Magazine picked an “anti-capitalist” like Pope Francis I was its Person of the Year for 2013. But at the same time, he’s starting to think he might be responsible.

“I’m just wondering, folks, if I gave a speech on anti-capitalism, do you think I could be named Person of the Year by TIME Magazine?” Limbaugh asked his listeners. With the news this morning, Limbaugh said he began to receive calls and notes from supporters “who think the pope was named Man of the Year because of me… That TIME Magazine hated me more than the pope, and therefore it was a thumb in my eye.” He made pains to say that these ideas were coming from the outside and that he himself doesn’t “believe” it.

“Now, I’m not a narcissist and I don’t think everything’s about me,” Limbaugh continued, “but I can’t tell you the number of people who’ve sent me notes” regarding the cover. People have apparently been suggesting to him that he hadn’t criticized the pope for being a “Marxist”, TIME would have given the top spot to its runner-up, Edward Snowden, something that ironically would have made Glenn Greenwald very happy.

“There are people, I’m telling you, that think I should be the co-recipient, that nobody would have even noticed what the pope had written about capitalism if it hadn’t been for me,” Limbaugh said, before adding, “But I don’t think that.”