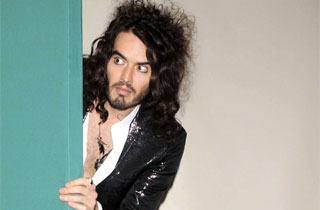 Don’t get confused by the headline: Russell Brand will forever and always be doing comedy, crusading against Fox News, and rousing the rabble. But Hollywood and the movie business (and, potentially, the “marrying celebrities” business) — he’s probably gonna quit that.

As he told the Financial Times in a highly ironic interview, Brand, who recently made headlines by trolling Fox News’s offices, mentioned that he wasn’t interested in making money anymore — a declaration compounded by the fact that he’d spent the past five minutes talking about what was wrong with capitalism:

Does that mean that there will be no more acting, no more Hollywood?

Brand pauses. “It probably does mean that, yes,” he says, hesitantly, as if making up policy on the hoof. But he’s not going to quit comedy, he says, because he loves performing. When I ask how lucrative it is, he shrugs.

“It makes me scared if I think about money too much, then it makes me feel guilty. The only thing I tell the people who look after my money is, ‘Make sure my fucking taxes are 100 per cent legitimately paid,’ and then I do my own shit.”

But isn’t he against taxes? “Only as part of a mass movement, not as tax evasion,” he says.

Surely he can only afford to do his own shit because he is so rich. Would he really be prepared to give it all up?

“I’d give up everything. I’ve thought about this a lot, whether or not I’m prepared to go to prison or die for what I believe in. The answer is 100 per cent, without question, yes, I’m willing to die for this.”

The FT reporter then questioned whether he was actually serious about this no-capitalism thing, and got this response: “Well, that makes me think you’re nuts because you’re going to die as well and when you die it’s going to be for nothing, an unremembered, pointless death, propping up a dead system!”