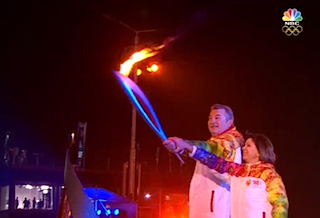 Friday night’s Winter Olympics opening ceremony from Sochi was capped off by former figure-skating champion and current member of Vladimir Putin’s United Russia party Irina Rodnina lighting the massive Olympic torch for her country. But the three-time gold medal winner’s turn in the spotlight has revived the controversy over a tweet she sent out last September showing President Barack Obama and First Lady Michelle Obama with an image of a banana super-imposed in front of them.

The Russian skater who just lit the Olympic flame tweeted this doctored, racist photo of the Obamas last September. pic.twitter.com/kQhIDqXwki

At the time, Rodnina defended her tweet, posting a message in Russian that translates to “Freedom of speech is freedom of speech! If you have issues it’s your problem!” The timing of her tweet was notable as well: it came in the middle of U.S.-Russian tensions surrounding Syria’s apparent use of chemical weapons.

“She is a three-time Olympic champion, one of the most respected in the world of Olympic athletes,” the Sochi Games’ organizing committee president and CEO Dmitriy Chernyshenko told reporters Saturday. “I want to stress that Olympics is not about politics, and any political talks about discussions are inappropriate.”

Watch the video of Rodnina lighting the torch below, via NBC: