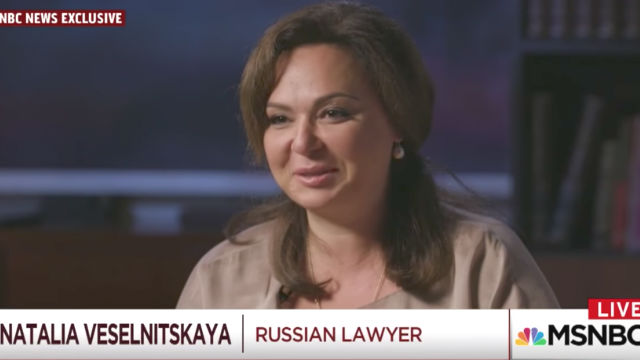 A new report says that the Russian attorney who met with Donald Trump Jr. and Trump campaign officials last year discussed her game plan with a high ranking member of the Russian government ahead of time.

According to The New York Times, Natalia Veselnitskaya met with prosecutor general Yuri Y. Chaika months ahead of her conversation with the Trump scion during the 2016 election. Records indicate that Veselnitskaya showed Chaika the talking points she planned to use with Trump Jr., and her memo also contained the damaging information she promised to provide on Hillary Clinton.

Veselnitskaya’s research reportedly accused Ziff Brothers Investments, an American investment firm, of financial fraud and large-scale tax evasion in Russia. The lawyer claimed that the firm’s “stolen” money provided a “financial vehicle” for a number of major Democratic donors, two of whom contributed to Clinton’s campaign.

A colleague of Veselnitskaya’s told journalists that Chaika’s office approved of her findings, and they reportedly worked together to pass the information to an American congressional delegation visiting Moscow last year. One of the congressman who received the memo was California Republican Dana Rohrabacher, who is known for having pro-Russia views and a connection with Julian Assange.

When the news of Veselnitskaya’s meeting with Trump Jr. broke months ago, she denied that she was operating as a Kremlin proxy at the time. She and Trump Jr. insisted that their talk only pertained to the Magnitsky Act, though Trump and his father both came under scrutiny as continued reporting shed light on the exact circumstances behind the meeting.