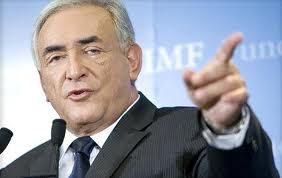 Zut alors! It seems like the French media is buzzing with new information on the Dominique Strauss-Kahn trial today. Strauss-Kahn (or DSK, as the French call him) was accused of attempted rape and sexual assault by a maid who worked at the Sofitel Hotel in midtown Manhattan, but has just been released from house arrest following questions about his accuser’s credibility.

Although the American media has really been enjoying this story (The Post especially) it seems pretty likely that we’ll basically forget about DSK if he is acquitted. However, he will get a whole lot more interesting in France. You see, before he was thought of as a rapist, he was thought of as a great hope for the Socialist party in France. I know here in America we’re all like, socialism, OMG, stop it, but they love it in France. The Socialist party is one of the major French parties, kind of equatable to our democratic party. While current President Nicolas Sarkozy represents the Union for a Popular Movement (the right-wing-ish party), the Socialist party had a lot of control over the country until  2007 and Strauss-Kahn was a presidential hopeful in that election. He was the runner-up in the primaries.

So, pre-scandal, he would have been a logical choice for the Socialist nomination for the 2012 election. However, while he probably wouldn’t have even the slightest shot of winning an election in the States, things are a little different in France. A breakdown of French publications (Merci Google translator and French class) reveal that he’s being received a whole lot more favorably on the other side of the pond.

Le Nouvel Observer wrote that the Socialist party is basically an excited mess about the information. Applications for DSK’s primary run are being filled out and it seems that the Socialist party still believes he might be their best shot for office. Other papers reiterate this idea of “hope”: Le Parisian titled their article “DSK: his supporters dare to hope” while Le Point wrote that the mayor of Paris “hopes” to see DSK ruled as innocent. Le Monde proceeded with a little more hesitation, titling their article “Socialists between caution and hope”. But all in all, “espoir” seemed to be a buzz word for the Parisian press today.

This seems almost unbelievable to most of us in the States. Didn’t we just essentially force a man to resign for sending dirty pictures? DSK is accused of raping someone. I think it’s pretty fair to say his political career would have been done in America. But the French aren’t fighting the same Puritanical roots. No country is okay with rape, but France is a little more relaxed about marriage than we are. There was a sexual encounter between DSK and the maid: that has never been in question. The issue with the case has been that he said it was consensual and she said it was not. Now that that is seemingly not an issue any more, the notion of fidelity is all that remains. Americans would still be outraged that DSK cheated on his wife (and is, by most accounts, a total letch) and he wouldn’t have a shot in an election. However, the French don’t look at it the same way.

L’Express wrote an article called “Can Dominque Strauss-Kahn get back on track” in which they quote their reporter Jean Daniel-Levy as saying “in the U.S., having extra-marital relationships is extremely damaging, which is not the case in France, where everything comes to sexual behavior as a kind of indulgence.” Overall, L’Express concludes that while allegations of rape are damaging, if DSK were to get off, he might have a shot. However, they note that his indulgent behavior while under house arrest (he lived in a rather expensive pad in TriBeca) might be isolating to some voters, particularly as the Socialist party is not particularly known for it’s support of the wealthy elite. Yes, it seems that elitism might be as damaging as rape in France.

It will be interesting to see how the rest of the case pans out and whether DSK can actually execute a Presidential campaign. While his supporters have made their interest in seeing him on the ticket clear, he hasn’t actually expressed any intent to run yet. But it certainly seems fair to say that he can be considered a presidential possibility.