How Do You Crash A White House State Dinner?

How Do You Crash A White House State Dinner? 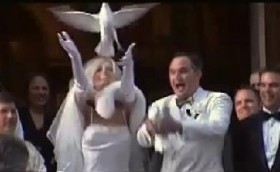 As we head into the news hell that is a long holiday weekend, you can be sure to learn more than you ever wanted to know about the White House Party Crashers, Tareq and Michaele Salahi. Of primary concern is how this pair of Chester Cheetah-level socialites managed to brazenly blow their way past the Secret Service and into the White House for the ultra-exclusive State Dinner in the first place. My expert opinion? They didn’t.

The Salahis, owners of the Oasis Winery and the America’s Cup of Polo, are rumored to be part of Bravo’s upcoming “Real Houeswives of DC” reality show. Actually, there are more than rumors. In September, the Salahis were spotted being trailed by a Bravo film crew, and Michaele Salahi’s makeup artist reported seeing a TV crew filming them as they prepared to crash the state dinner. Though Bravo declined to make a statement yesterday (even to NBC News, part of its corporate family!), today Bravo reluctantly confirmed that a “Real Housewives” camera crew was ineed with the Salahis as they crashed their way to the most exclusive ticket in town. They’ve got a flair for the dramatic, as their cheese-tastic wedding video shows.Yes, they’re throwing doves.

NBC’s Brian Williams also says he saw the couple’s SUV turned away at the East Gate, at which point they got, camera and makeup people in tow, and went to the pedestrian entrance. (video below)

I spoke with Secret Service spokesman Ed Donovan this morning, and he would only offer  that they had identified a checkpoint at which proper procedures were not followed, and that the incident would be investigated. He stressed that, no matter which checkpoint was the problem, “It’s on us.” He stressed, again, that the Salahis had been subjected to the same stringent physical checks (magnometer, x-rays, etc.) as the other guests.

A White House official tells me that the White House has called for a “full review of the incident” by Secret service.

The Secret Service isn’t saying which checkpoint was the problem, nor will they confirm or deny whether the Salahis were already on the grounds when the misstep occurred. This is an important distinction. Once you’re inside the White House gates, it becomes significantly easier to wander into someplace you don’t belong, especially with a crowd. It’s possible that a White House staffer walked them through the gates, perhaps for a legitimate purpose. The Salahis know a lot of people in DC, as their 2,000-person wedding guest list attests.

It would have been a challenge for the Salahis to have slipped past the first checkpoint. First of all, the Secret Service Uniformed Division are extremely, shall we say, detail-oriented. On my first day at the White House, I watched them turn away a very famous person that they see pretty much every day because he wasn’t on the list. He was only admitted when a White House staffer vouched for him.

Since then, I’ve seen countless people hold up the line trying to get in, most of whom really did belong there but weren’t on the list, including me. It doesn’t matter who you are or what your story is, if you’re not on the list, No…Soup…For…You!

Even if you decide that once in a million times, someone could slip through unassisted, what are the odds that it would be this couple, who were planning to slip through? It doesn’t seem possible.

The Secret Service’s Office of Professional Responsibility has been tasked with investigating this incident, but it will be interesting to see how they let this play out publicly. If the Salahis got onto the grounds legitimately, and then snuck into the dinner, it’s embarrassing, sure, but a much less serious security problem.

If, on the other hand, they just managed to talk their way past that first checkpoint, it points up a disturbing vulnerability. Even though they were physically checked, there’s a reason for doing background checks on White House visitors, especially ones who will be sharing dinner with the President.