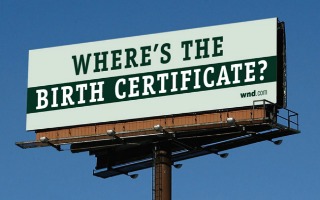 The public polling industry, like so many businesses that rely on the political cycle for their fortunes, suffers when the election cycle is over. Pollsters have to think of new and creative ways to remain relevant, and sometimes this yields embarrassing and worthless results. It is in these periods we learn how nation would respond if Tim Tebow ran for political office, whether people believe Santa Claus is a Democrat or a Republican, and what percentage of Americans want to annex Canada. In that ignoble tradition, Fairleigh Dickenson University’s pollster has tested how many Americans believe some popular conspiracy theories. They found some results that are potentially embarrassing for just about everyone, including Republicans. Enter Salon Magazine, Gawker, and ThinkProgress which have successfully embarrassed themselves in an effort to capitalize on these flawed survey results.

“64 Percent of Republicans Are Birthers,” screams the breathless headline of Alex Seitz-Wald’s post on Salon.

“A whopping 64 percent of Republicans think it’s “probably true” that President [Barack] Obama is hiding important information about his background and early life, including his possible birthplace, according to a new nationwide survey of registered voters from Fairleigh Dickinson University’s PublicMind project examining Americans’ belief in political conspiracy theories,” Seitz-Wald wrote, though he later corrected his account

ThinkProgress and Gawker also joined in with a post on the staggering number of “birthers” in the GOP. The headline was simply too good to look into the polling data.

Let’s examine why this poll is flawed. First, the wording of the question which elicited responses that have tickled the progressive left so.

“President Obama is hiding important information about his background and early life,” is the question posed to respondents. Does this include the debunked and always-baseless notion that President Obama is constitutionally ineligible from serving as the nation’s chief executive due to his place of birth? Sure does. Could this also include his full medical records (Obama only released one-page summaries during his 2008 and 2012 campaigns) or his academic transcripts?

Without alleging any cover up or wrongdoing by an administration official or the president himself, it is true that this information has not been released and their release is subject to the president’s discretion. No other president or presidential candidate has released all their records or transcripts, and Obama should not be expected to either. But FDU did not qualify their question. They knew the response that they would get — in fact, it was probably their goal to get as many self-identified Republicans to agree with this statement. The 14 percent of Democrats and 33 percent of independents who agreed with this claim was “probably true” were just a bonus.

Salon and ThinkProgress’ sins of commission end there, but their sins of omission have just begun. A solid majority of African-Americans in this survey said they thought it was true that “President [George W.] Bush‘s supporters committed significant voter fraud in order to win Ohio in 2004” and “President Bush knew about the 9/11 attacks before they happened.” Think for a minute of the public outrage over the various headlines that these revelations could have yielded.

Towards the end of FDU’s release announcing this rabble-rousing poll, they quote a professor of politics who notes that it is political alienation, not necessarily just a lack of education or gullibility, which leads some to unfortunately believe in these long since debunked conspiracy theories.

Republicans, just as Bush-era Democrats who were largely shut out of the political process, are more receptive to conspiracy theories. This is a frustrating condition of the modern era. The instinct to score a cheap political point from this flawed poll –- indulged predictably by ThinkProgress and lamentably by Salon –- is the real story.

UPDATE: The Daily Beast‘s Justin Green published the full quote by FDU professor Cassino in which he denies that poll found that a majority of Republicans are “birthers.” “Do 64% of Republicans think Obama was born in Kenya?” Cassino asked. “Almost certainly not.”