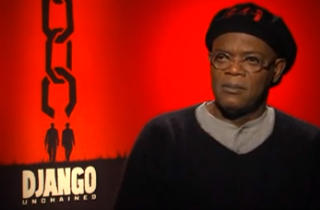 Never afraid to create an uncomfortable situation, actor Samuel L. Jackson used a recent press junket as an opportunity to make a reporter squirm in his seat after asking about the repeated use of the “n-word” in Django Unchained.

Hollywood reporter Jake Hamilton asked Jackson about the film’s controversial use of the historical racial slur, and the actor pretended not to know which exact word the interviewer was mentioning.

“No? Nobody? None?” Jackson feigned ignorance. ”The word would be…”

Hamilton timidly explained he didn’t want to say the actual word, but Jackson urged him a few times to give it a shot before taking on the famous Jackson angry tone: “Try it!”

“We’re not going to have this conversation unless you say it,” the actor then jokingly threatened before asking Hamilton if he wanted to move onto another question.

When the interviewer did in fact move on, Jackson laughed, prompting Hamilton to once again declare he does not want to say the word.

And so Hamilton tried to turn the tables, asking Jackson to say it too. “No,” the actor replied, “fuck no!”

“That’s not the same thing,” he explained before once again getting playfully aggressive with Hamilton: “Say it!”

Ultimately, the two resolved to move on, seeing as how any mention of the word would result in the segment getting cut. “Oh well, it was a great question,” Hamilton lamented.

“No, it wasn’t,” Jackson disagreed. “It wasn’t a great question if you couldn’t say the word.”