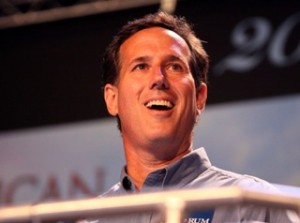 A new CNN poll has Rick Santorum roaring back back from the bottom of the GOP pack to 16% in Iowa. Virtually everyone in the Republican field has had their moment in the sun, except for the former Pennsylvania Senator, until today.

RELATED: Rick Santorum Promises To ‘Pack Up And Go Home’ If He Is ‘Dead Last’ In Iowa

In CNN’s new poll, Mitt Romney is the new frontrunner at 25%, Ron Paul is at 22% and out-of-nowhere, Santorum has leapfrogged to third at 16%.

CNN political writer Paul Steinhauser notes that “Santorum is campaigning on a shoestring budget, but he’s visited all of Iowa’s 99 counties and has made a strong pitch towards social conservative voters.”

“Most of Santorum’s gains have come among likely caucus participants who are born-again or evangelical, and he now tops the list among that crucial voting bloc, with support from 22% of born-agains compared to 18% for Paul, 16% for Romney, and 14% for Gingrich,” according to CNN Polling Director Keating Holland.

Red State’s Ed Erickson is not happy by this new development:

Santorum has no money or organization outside of Iowa and cannot win the nomination, but Iowans love a guy who sucks up to them and makes sure they know he loves the babies.

As a pro-lifer myself, I have to throw up a bit in my mouth that Iowa conservatives are seriously considering Rick Santorum, which will only help Mitt Romney, a guy who even after his supposedly heartfelt conversion to life put some seriously pro-abortion judges on the Massachusetts bench hiding behind the “Well it was Massachusetts for Pete’s sake” defense…

Rick Santorum will not be the nominee. That’s the reality. But his rise hurts Bachmann, Gingrich, and Perry in Iowa — all of whom have better organizations and better shots beyond Iowa.