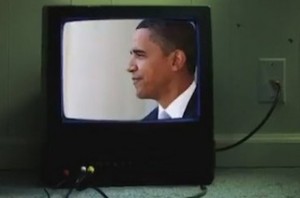 In a new Rick Santorum attack ad released on the web entitled Obamaville, images of President Obama and Iranian President Mahmoud Ahmadinejad appear to be shown interspersed together. MSNBC.com reporter M. Alex Johnson observed that “at the 40-second mark, an image of Ahmadinejad is shown on a small TV screen. For less than a half-second, the picture flashes to a similarly framed picture of Obama before returning to the Iranian dictator.”

See the frames in question below:

On Friday, Politico’s Dylan Byers questioned Santorum spokesperson Hogan Gidley over the ad, and and whether it featured a subliminal message trying to tie the two together. “Don’t be ridiculous,” Gidley shot back. “He’s the president of the United States, Ahmadinejad is the president of our sworn enemy.”

Byers: Is the moment when Ahmadinejad and Obama’s images are interspersed meant to suggest that they are the same person?

Byers: And there’s no suggestion here that Obama is Ahmadinejad?

Gidley: No, no, no, no, no. We’d be a lot more deliberate if that’s what we were trying to do. There’d be something a whole lot more — Rick doesn’t parse words, our campaign, we’re not sneaky people. We’d tell you what we think, obviously. That’s not what we’re trying to do.

Byers: Was there any point at which you were looking at this ad and thought this might be an issue?

Gidley: Not the specific moment. I thought that the whole ad would definitely raise some questions, I just didn’t know which questions you guys would come up with. The bottom line is, the campaign is making a point that Barack Obama is wrong for the country. He’s wrong on foreign policy, he’s wrong on domestic issues. That’s basically what the ad is trying to say, in a horror story fashion.

Byers: How does a shot of Ahmadinejad and Obama switching back and forth make the point that Obama is wrong for the country?

Gidley: I don’t even know. I need to go and look at this ad, because I don’t really remember the part you’re talking about. I’ll call you back.

Byers also talked with John Brabender, the creator of the ad. “To see [a conflation of Obama and Ahmadinejad] would be to see something that was not intended to be there in any way. And there’s nothing in there that says ‘Buy Popcorn’ either,” Brabender claimed.