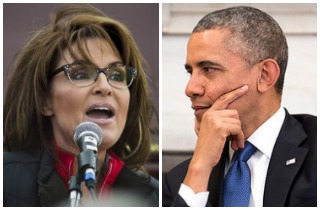 In the BuzzFeed-esque blog post, Palin referred to Obama as “America’s busiest tourist” and lampooned him for focusing on too many press-friendly, accessible stops. The former vice presidential candidate then provided a partisan list of things Obama should have done instead, complete with all-bold ledes and a dazzling array of photos — many featuring Russian President Vladimir Putin.

Hell, she even tried her hand at adding a few comedic twists to the whole shebang:

While here, he enjoyed spectacular autumn weather which he commemorated with many selfies on a stick. He danced, he held a fish, he hiked a glacier (thankfully not the Mendenhal Glacier, for that chunk of ice is, literally, the size of Rhode Island. Instead, he enjoyed one of the other 100,000 Alaskan glaciers). And, he renamed a mountain…our mountain…the tallest peak on the North America continent.

Granted, the selfies are ridiculous and deserve ridicule — especially when selfie sticks are involved. But a Rhode Island joke? Aside from Family Guy, who the hell cares enough to make fun of a state that gets 3% bigger at low tide? As for the jab about renaming Mt. McKinley, we already covered the fact that, um, he didn’t. The U.S. Secretary of the Interior, Sally Jewell did.

There are a few other good bits of comedy here and there, including the moment Palin uses a not-so-veiled reference to climate change — you know, that thing she’s not exactly a believer of:

Unlike most tourists, the President heads home now with his enormous fleet of transport vehicles – ironically after plenty of finger pointing on this Global Warming tour. Astoundingly, with just this one trip, a bigger carbon footprint was created than what 33 cars combined would create in an entire year.

Hilarious! Plus, let’s not forget her swipe at Washington D.C. et al. — even though, um, she kind of tried to help win the White House for John McCain in 2008:

Residents here are thankful when far-away decision makers who control the vast majority of Alaska’s land and resources give us the time of day.

Mockery aside, however, Palin’s op-ed did feature two absolutely fantastic jokes. One was, I believe, completely unintentional, and the other was, like the selfie stick, too good to pass on.

The latter concerned a heavily-photographed episode in which, while handling a live salmon, Obama got fish sperm all over his black shoes. Needless to say, when a salmon spawns all over your black boots, it’s going to show up quite easily in the ensuing photographs. Palin included one of these in her blog post, along with the line, “Mr. President, I’m glad you loved Alaska…these residents were excited to see you…that’s the Alaskan spirit!”

Not too bad, but still not as good as the unintended bit of hilarity. You see, Palin is going by the pen name “Denali” over at IJReview — as in, the traditional name for Mt. McKinley, which Obama apparently named on his own, impeachment-worthy volition. Why? Because, as the editor’s note explains, it “was the name assigned to Gov. Sarah Palin by the United States Secret Service during the 2008 campaign.”

Wait, so does that mean that Palin’s codename on the campaign trail was a Kenyan word for “black power”? Irony, it would seem, is a b*tch.