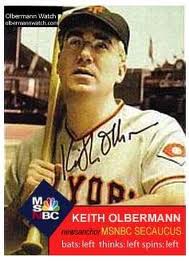 On Tuesday’s Countdown, host Keith Olbermann and guest Michael Moore sparked widespread outrage over their dismissive treatment of rape allegations against Wikileaks founder Julian Assange. An online protest ensued, and as Michael Moore ignored pleas for a correction, Olbermann tried to fend off criticism on Twitter. When he was unwilling to respond to legitimate questions regarding his handling of the allegations, Olbermann announced that he was quitting Twitter until the “frenzy” died down. If Sady Doyle, the woman who started the protest that forced him off Twitter, is any indication, he could be waiting a long time, and taking serious damage in the process.

The primary reason that people like Glenn Beck are somewhat immune to protests like this is that they’re generally carried out by people who already aren’t watching. Beck may say things that enrage people, but he’s not enraging the people in his audience. Fox News Channel can assess the effect of advertiser boycotts through the prism of his enormous audience, and make the calculation that the benefit outweighs the cost.

In Olbermann’s case, though, he has picked a fight with people who would normally be watching him declare spreaders of misinformation “Worst Person in the World.” Sady Doyle, the woman who started the #MooreAndMe hashtag, describes her sense of betrayal at being blocked by Olbermann thusly:

Number of Beloved Progressive Journalists Who Had Blocked Me On Twitter Yesterday: None, as far as I know!

Number of Beloved Progressive Journalists Who Have Blocked Me On Twitter Now: One. And it’s Keith Olbermann.

There’s no way to put a number on it, but it stands to reason that a substantial number of the #MooreAndMe protesters are also Countdown viewers, or potential viewers. Just as handling this properly could have been a big win for Olbermann, botching it so badly could hurt in ways he never imagined.

In her piece for Salon today (which bears reading in full), Doyle brings another key difference between Olbermann and Beck into sharp relief. Speaking about some of the misguided reactions she has gotten on Twitter, Doyle says:

One of the chief objections, from fans of Moore and Olbermann, is that Assange isn’t being charged with rape. “He was accused ONLY of consense.sex w/o a condom,” wrote Twitter user MariahWestwind. “u r all fucking retarded, really fucking dumb……….it was consensual sex and his condom broke which is a crime in sweden u fucking retards,” wrote a commenter on my blog, “Ralph,” who was sadly deleted. This is demonstrably wrong. It’s untrue. But Ralph, Mariah, and all the others have reason to believe it. Because they got the information from the news. They got it from Michael Moore. And they got it from Keith Olbermann.

People trust journalists: If a journalist says something, like “the term ‘rape’ in Sweden includes consensual sex without a condom”(Olbermann’s own, demonstrably false, as-yet-unredacted words), most people will believe that what he has said is true, and act as if it is true, without doing further research. Because the job of a journalist is to tell people the truth, to give them all of the information they will reasonably need, and to redact and correct his statements if they are later proven wrong. Statements made by journalists, particularly those as prominent as Olbermann, have measurable impact on how people make decisions: MariahWestwind is basically quoting Keith Olbermann. There’s a rape investigation going on, and Mariah doesn’t know it. Because Mariah trusted Keith Olbermann to tell her the truth, and Keith Olbermann failed to honor that.

Glenn Beck has no journalistic pretensions, and therefore has no journalistic reputation to ruin. Olbermann’s journalistic bona fides have been questioned in  some quarters, but not by his audience of progressives, of which mainstream feminists are a core subset. This is where Olbermann stands to lose the most. One of the key distinctions Olbermann makes between himself and his Fox News counterparts is his willingness to admit when he is wrong. Had he done so in this case, all might have been quickly forgiven.

By digging his heels in, and painting his critics as “frenzied,” a loaded, stereotypical phrase, he has defied the expectations of his own audience, and not in a good way.

Keith Olbermann is a huge baseball fan, as was I until Pete Rose and steroids ruined it, so perhaps he will heed the example of the titular barefooted ballplayer. “Shoeless” Joe Jackson was a baseball hero who was disgraced during the 1919 “Black Sox” scandal, and this anecdote has become synonymous with crushing disappointment in a once-beloved figure:

When Jackson left criminal court building in custody of a sheriff after telling his story to the grand jury, he found several hundred youngsters, aged from 6 to 16, awaiting for a glimpse of their idol. One urchin stepped up to the outfielder, and, grabbing his coat sleeve, said:

“Yes, kid, I’m afraid it is,” Jackson replied. The boys opened a path for the ball player and stood in silence until he passed out of sight.

“Well, I’d never have thought it,” sighed the lad.

“Shoeless” Joe never recovered from that scandal, and it haunts his legacy to this day.

Keith Olbermann didn’t throw the World Series, but in the eyes of many who used to trust him, he has violated an even deeper trust. Even the best journalists make mistakes, but only the worst refuse to correct them.

Luckily for Olbermann, he still has a chance to say it ain’t so. Having Sady Doyle appear on Countdown to accept his apology is a good place to start.