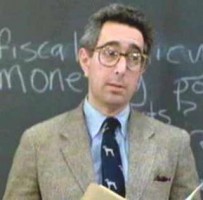 Howard Lindzon thinks it might. Over on his blog, Lindzon, who does have some investments in online educational video startups, waxes poetic about how the scalability of web video will give rise to Kobe Bryant-like teaching superstars, give students better educations, and maybe force a few thousand “mid-level hacks” out of their jobs in the process.From howardlindzon.com:

To wit: here’s a lecture by MIT’s Walter Lewin on torques and oscillating bodies, courtesy of Academic Earth:

Not everyone is thrilled by the prospect of such a transition. One commenter had a lively back-and-forth with Lindzon, accusing him of being “the Walmart guy that advocates crushing mom and pop stores” by scaling moderately talented non-superstar professors out of existence.” Lindzon, typically, was evasive and a little mischievous. Responding to the analogy “if you can watch the most beautiful video online, why have sex with your own wife,” he wrote, “Its not the same analogy. Its definitely a choice.”