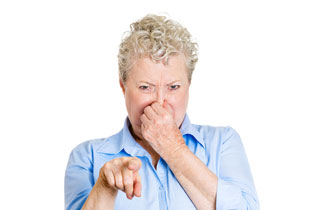 In a new (and very real) study, researchers at the University of Arkansas found that if you pump a room full of disgusting smells, the stench will, apparently, make people express stronger conservative views — specifically against homosexuality. (‘Cause, y’know, butt stuff is gross or something?)

The study, titled “Disgust and the Politics of Sex” and published in PLOS One, asked two groups of randomly selected participants to fill out a questionnaire about their attitudes towards multiple political issues, asking them to rate their opinions from “not at all disgusting” to “extremely disgusting.” One group, however, was placed in a room that smelled of butyric acid — a.k.a. the key component in severe body odor and vomit — while the other room smelled normal. (They called the procedure “induced disgust,” which sounds like a terrifyingly painful situation to be in.)

There was a weaker correlation between terrible smells and other socially conservative issues, such as abortion, premarital sex, and pornography, but a stronger one in getting people to express their belief in “biblical truth.”

The scientists’ chart below asked participants for their attitudes about the following statement: “If a close friend of family member were gay, I would support their right to having a same-sex marriage.” 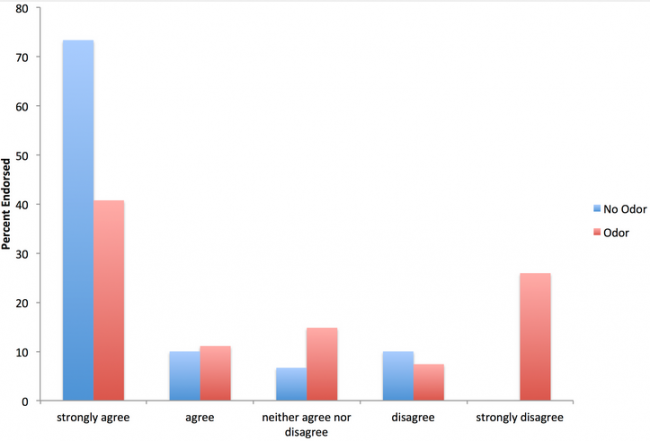 While the researchers were well aware of the correlation between disgust and ideology, they were surprised to see it expressed so strongly against gay stuff:

Disgust has an important, causal relationship with political attitudes concerning sexual conduct. In an experiment manipulating odor-based disgust, participants exposed to the smell of butyric acid reported increased subjective disgust and more politically conservative attitudes concerning gay marriage, premarital sex, pornography, and Biblical truth. Rejection of gay marriage was a particularly strong response to the disgust-inducing odor, perhaps because of the connection between homosexuality and perceptions of sexual impurity.

Sidenote: Perhaps this serves as insight as to why the world was infinitely more religious in the Middle Ages? It was, after all, a time where people would literally throw pots full of fecal matter out their windows into the streets.