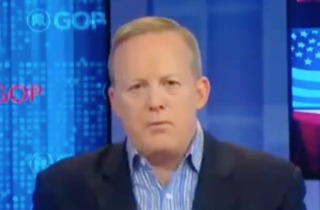 The Communications Director for the Republican National Committee is putting a lid on rumors swirling around that staffers were presented with an ultimatum to get in line with their party’s choice for the 2016 election.

One day after Donald Trump locked up the GOP nomination, the New York Times put out a report yesterday that examined how many conservatives are still deeply uncomfortable with the candidate. Indeed, despite calls for unity by some, several prominent party members say they will double down on the #NeverTrump movement and/or shun this year’s GOP convention.

Among the panicked details described by the Times, one passage stood out in particular:

“Some staff members at the Republican National Committee were told Wednesday that if they were unable to get behind the nominee, they should leave by the end of the week.”

Sean Spicer has taken notice of these unsourced comments, and he’s been putting his foot down on them all day:

don’t let facts and accuracy get in the way of your trolling #TrollersGottaTroll https://t.co/JZSCXJTGzG

since @INJO is doing so well maybe its time to send “reporters” to journalism 101 (so they can actually “report”) https://t.co/bCT4TQB36L

Thanks for the help – done that https://t.co/rMRw6F1Lgr